There are certain foods I don’t want to stop eating, no matter how full I am. Plantains are one of those foods.

Plantains are the übermensch of the banana family. Although they can’t be eaten raw (who wants an ingredient that gives everything up on the first date anyway?) plantains are delectable when cooked. Rich, savoury, sweet, and complex, plantains stand up to strong seasonings and (in my opinion) complement EVERYTHING.

I have been trying to lure my lovely friend Sweety, chef extraordinaire, to my kitchen with the promise of plantains for at least a month. Last night I succeeded. I set out an array of spices and ingredients before her and cleverly put her in charge of cooking the plantains. I think of this dish as “Caribbean” because of the use of scotch bonnets, rum, thyme and coconut, but as always I am taking slight liberties in ascribing an origin to a dish. Whatever it is, this dish is spicy and dense with flavour, and I DON’T WANT TO STOP EATING IT.

2 scotch bonnet chili peppers, seeded and minced (We used two because we both love our food very spicy. You should reduce this amount if your spice tolerance is low, but don’t omit altogether as scotch bonnets have a very particular and distinctive flavour.)

In a heavy-bottomed saucepan, heat 2 tablespoons of olive oil over medium-high heat and sauté the onions, garlic, salt and chopped chilis until the onions begin to turn translucent and are just starting to brown. Add rum, then gradually add the liquid from the tomatoes, stirring frequently until liquid evaporates almost entirely (about 15 minutes) 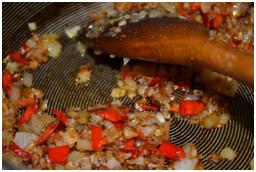 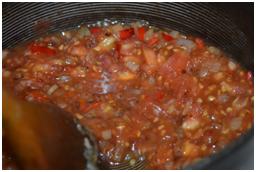 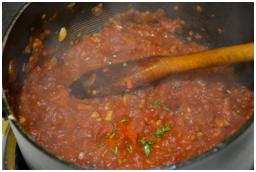 In a heavy bottomed frying pan big enough to fit all the plantains in a single layer, heat the remaining two tablespoons of olive oil and cook the plantains until soft and starting to caramelize on both sides, about ten minutes.

Pour sauce over plantains and toss gently. Return to low heat until just heated through, and serve, garnished with chopped fresh coriander (if you like).

Serves four to six as a side dish.