“Another soup?” I hear you gripe. “Didn’t Susan just make a soup?” To which I say, (a) yes, but (b) this soup is delicious! Also, (c) (cue plaintive voice) I’m jetlagged again, and (d) this month’s sweet heat challenge is SPICY SOUP! (I am stoked to have found a blogger as obsessed with chilis as I am. You can go ahead and call me a geek for entering online cooking challenges.)

I really do eat a lot of soup when it’s shitty outside. On cold drizzly days, a salad just doesn’t cut it. Plus I’ve been wanting to experiment with beans and coconut milk. So let me tell you about this soup. It’s really everything I (you) want in a cold weather soup (unless you want meat, that is). It’s creamy and slightly sweet from the coconut milk and hearty without being thick and porridge-y. It’s super spicy (duh), tangy without being sour, and the black beans give it a slightly meaty depth. I like the addition of the Greek yogurt as a garnish but it’s not necessary (especially if you want to make this soup totally vegan).

1-2 bay leaves (if cooking the beans yourself; otherwise, omit)

A 2 inch knob of ginger, peeled and sliced

2 scotch bonnet peppers, seeded and coarsely chopped (you can omit one of these if you are not a lunatic about spice, like I am)

200 grams (about half a can) of coconut milk

Juice of one lime

If using dry beans, bring the beans to a boil in approximately a liter of water with the bay leaves, then reduce heat, cover, and simmer until completely tender (about an hour and a half). Drain beans and discard bay leaves, reserving cooking liquid.

Heat the oil in a heavy-bottomed skillet and sauté the ground coriander, onions, ginger, and thai chili over medium-high heat until the onions are soft. Stir in the red bell and scotch bonnet peppers, and continue to sauté for another couple of minutes. Add the tomatoes and one teaspoon salt, reduce heat, cover, and simmer for an additional three to five minutes, or until the tomatoes have become soft and released their liquid.

Combine the vegetables in a large saucepan with the cooked beans along with 400 milliliters of stock. Bring to a boil, then reduce to a simmer and cook for a few minutes to incorporate flavours. Remove from heat and puree thoroughly. At this point, if you’re fussy about bean and vegetable skins in your soup, you can pass it through a sieve. Return to the pot, stir in the coconut milk, and add additional stock and/or cooking liquid until the soup is a consistency you like. Add salt to taste (I added two additional teaspoons). Simmer a further five minutes, stir in lime juice, and serve, garnished with fresh coriander and Greek yogurt (optional). 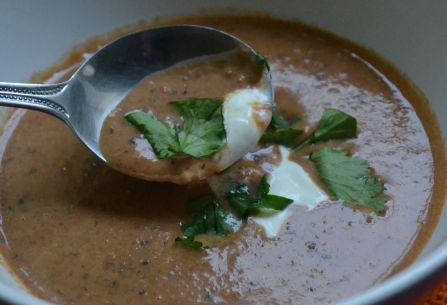