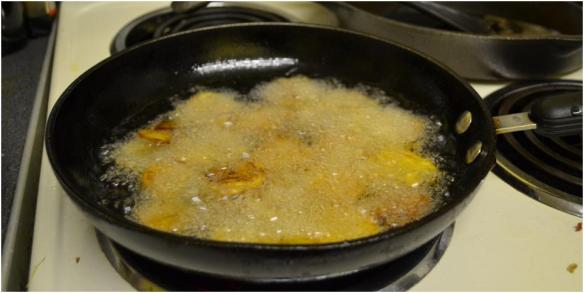 That, anyway, was the theme of my dinner party last night. Today I have a fried food hangover (perhaps it is just a hangover) and if someone were to sidle up to me with a giant plate of fried ice cream with dark chocolate sauce I wouldn’t have any. Well, maybe I’d have a little.

America loves its deep fried food. Fully one-third of Americans are obese, and a staggering 79 million American adults have pre-diabetes. I used to be a deep-fried non-believer, mainly because it is so goddamn unhealthy, but that was before I tried tostones cooked in lard (holy moly!) and deep fried twinkies. Eating deep fried twinkies is an ecstatic experience. Somehow a disgusting over-processed sugary snack cake is TRANSFORMED. The New York Times said it better than I ever could: “Something magical occurs when the pastry hits the hot oil. The creamy white vegetable shortening filling liquefies, impregnating the sponge cake with its luscious vanilla flavor . . . The cake itself softens and warms, nearly melting, contrasting with the crisp, deep-fried crust in a buttery and suave way.” If you ever want to try deep-frying a twinkie, freeze it first, then dredge it in batter and fry until golden. Consume.

There is some food that probably shouldn’t be deep-fried. Like salad. Also, it is probably not a good idea to deep fry a turkey unless you’re a trained professional. I don’t know if this craze ever hit the UK, but picture fat drunk American men lowering a giant 18 pound bird into a vat of boiling oil. Those fricking turkeys were exploding! (Full disclosure: friends and I have, in fact, deep fried a turkey. I may even have been drunk at the time. It was insanely delicious.)

Anyway, back to the dinner party. As so often happens, my ambitions exceeded my execution: I had intended to prepare tostones, aubergine fries with salt and honey, fried avocado, fried chicken, and fried ice cream, but I chickened out (ha! Unintentional pun!) and whacked the last three items off the menu. The tostones, served with a spicy jerk sauce, were gorgeous, even though I fried them in sunflower oil, not lard. The aubergine fries were a bit greasier than my Platonic vision; I’m going to perfect those before posting a recipe. My main course consisted of a much healthier roast chicken with Moroccan spices, Persian rice, and two nice salads, and dessert was lovely British strawberries and Guernsey cream. My friends didn’t seem too disappointed. 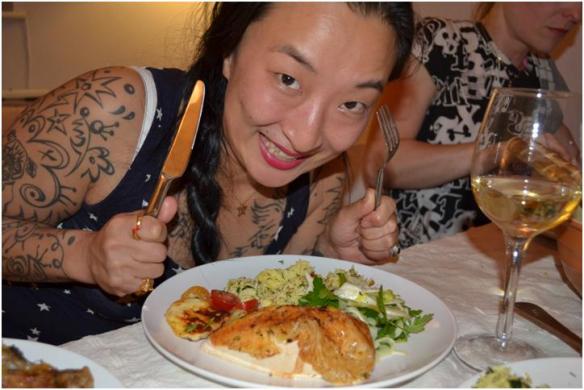