There are few things better than going to a really good bar where you know the bartender. That cozy feeling of communion as the drinks crafted ESPECIALLY FOR YOU are placed before you is an experience on a par, I’d say, with going on a really sexy first date. (The two, of course, are not mutually exclusive.) One thing that gives this most singular of pleasures a run for its money is going to a good bar where you don’t know the bartender but ARE TREATED AS IF YOU DO. Mark’s Bar at Hix delivers that experience, in spades.

ANYWAY. The first excursion THAT COUNTS was on a rare late weeknight when the bar was only half-full. For those of you who haven’t been here, Mark’s is a lovely secret place, tucked away behind and below the large, loft-like restaurant on Brewer Street, with tin ceilings and a long pretty bar, comfy leather couches, big wing chairs, and a teeny vintage (in the British sense – i.e., more than 75 years old) billiards table. Friend V and I sat at the bar, and time slowed like treacle as enchanting sprite-like Leo, bar manager and an old friend of V, brought us customized drinks and then a flight of his seasonal infused gins – strawberry, raspberry and rhubarb. (Rhubarb was my favourite, although raspberry, which smelled like jam and tasted like something I could drink a lot of at one sitting, was a close second.) It’s the kind of bar experience that stays with you.

Several weeks later, visiting Seattle friends and I had just seen Mozart’s Requiem, and trust me, we needed a drink.

Seattleites are total cocktail geeks. (Seattle is home to the bar, and the bartender, that some credit with starting the cocktail renaissance on the west coast and elsewhere.) Mark’s Bar at Hix – a bar that has embraced the history, context, and therefore (IMO) the art of the craft cocktail – was the obvious choice. “It’s standing room only,” the hostess upstairs told us doubtfully. (I do like that Mark’s Bar controls how many people can be in the bar at once, even though it is probably a fire code thing.) Miraculously, though, after threading our way through the bar we found a corner wing chair, a tiny table, and two more chairs.

And then the music really began. I gutsily ordered The Artists Special (£11.50), a drink that (according to the menu) “admirably shows, that contrary to popular belief, peaty Whisky can be used in cocktails.” Served in a chilly tin flagon that made me feel fabulously medieval, this cocktail balances the whisky’s peat-smoke flavour with sherry, lemon juice and – brilliantly – red currant syrup. Friend Cindy had Jo’s Special (£10.25), a delicate clean gin drink made with dry vermouth, orange liqueur and lemon juice. Friend Dan, however, went for the gold with the Criterion Milk Punch (£9.25). According to the menu, this drink dates to 1878. Rum and brandy infused with pineapple and citrus and a “complex spice mix” are “softened” with milk, then aged and clarified before being served. What the menu doesn’t tell you, however, is that the drink is aged for 48 HOURS. I love this devotion to the alchemy of the cocktail. The Criterion Milk Punch is creamy, complex, exciting, and fun to drink. 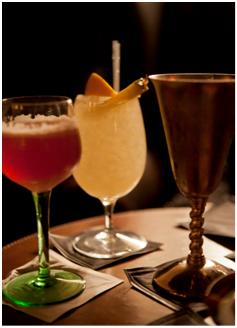 Round two was the aptly-named Mark’s Alchemy for me (£10.25), again, a very smart drink, that elevates the old-fashioned gin cocktail with the addition of just the right amount of chamomile syrup. Cindy went for the Green, Green & Green (£10.25). It’s a long cocktail made with pine-infused gin, green tea, green chartreuse and sweetened lime juice. The first time I tried it, during one of my earlier visits, I couldn’t really taste either the pine or the green tea. This time, however, the flavours were there and the balance was right. Dan rolled with the punches (sorry, couldn’t resist) to try Punch a La Regent (£11.50), literally a Regency-era punch made with sherry, rum, brandy, curacao, pineapple syrup, lemon sherbet, green tea, and topped with champagne. In other words, a hangover in a glass. As might be expected, we all found this drink a bit on the sweet side, but given the ingredients it’s not like we reasonably could expect a dry cocktail. 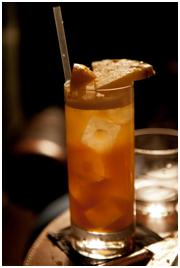 The bar menu reflects the understanding that all anyone really wants to eat when drinking strong cocktails is salt and fat. The baked bone marrow and toast (£4.95) was tasty, but I would have preferred it without the addition of tangy breadcrumbs. In my opinion, baked bone marrow is one of those perfect foods that needs no adornment, other than perhaps coarse salt. The Blythburgh pork crackling (£3.25), however, served warm with what tasted like gooseberry jelly, was AWESOME. 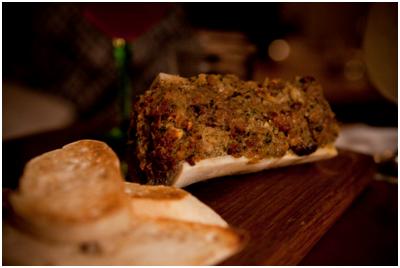 As I became suffused with the warm glow of the alcohol, dreamily watching a hologram of a skull appear and fade away over the fish tank in the wall (I still can’t decide if the fish were real or not), I began to fall in love, a little. The servers were so NICE – warm, accommodating, patient –tender even. This is a rarity in Soho. Our own server, Mia, actually kissed the top of my head when she brought us our bill. I kind of wanted to ask her to marry me.

The drinks aren’t cheap, but we left that evening with a feeling of total satisfaction, like we’d all just spent an evening on a dream date. Amazing.