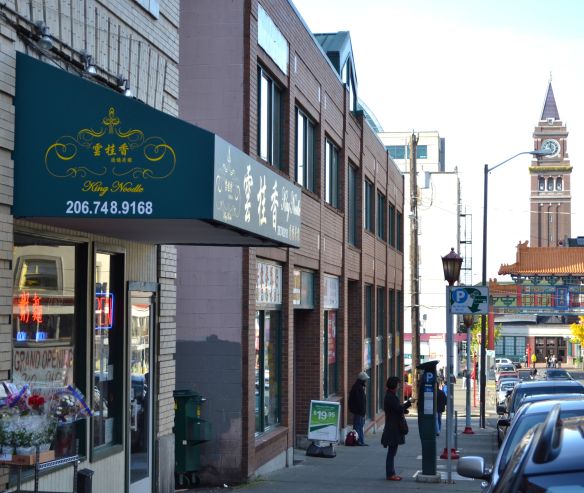 When I have a hangover, there is one kind of food I want to eat and one kind only: spicy noodle soup. Preferably with lots of meat in it, and extra chili peppers.

Those of you who have been following my Seattle exploits (now sadly behind me, like a distant dream) will not be surprised at all that by Saturday (after I concluded my second cocktail crawl), I was so toxic that noodle soup was not merely an option, it was a necessity. I was eager to try King Noodle, which had gotten rave reviews from my reliable food-loving friend Suzie. Three of my friends, equally hungover, piled into the car and we were off.

As a concept, King Noodle is brilliant. You pick your soup base. You pick a type of noodle. You pick two meats and two vegetables. You pay $6.99. 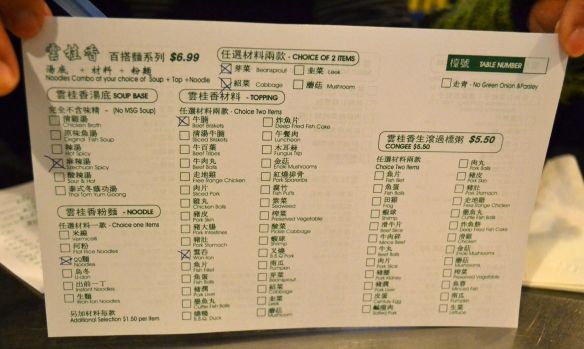 One does (or at least I do) feel a bit like Milo in the Phantom Tollbooth however, who, upon giving his speech in Dictionopolis, discovers he literally must eat his words. You are the master of your destiny, and if your soup choice sucks, the implicit conclusion is that it’s your fault. I feel this pressure particularly acutely because in Chinese restaurants, I always want to order the things that are total mysteries. “QQ noodles,” for example, were an obvious choice. “Beef tribes” beckoned, until I realized that this was probably tripe. I was deeply curious about the enigmatic “luncheon” as well as the “fungus trip,” which sounded like something I might have encountered in college. But I ended up playing it fairly safe. Remember, I was hungover. “Szechuan spicy” soup base (natch), beef brisket, wontons, bean sprouts, and cabbage. This is what I got: 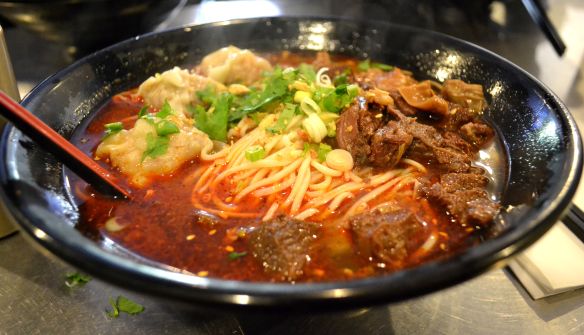 I chose well. The brisket was excellent. It had been braised in stock until it was meltingly tender, the wontons were fresh, and the noodles also were fresh. Ultimately, though, at a place like King Noodle, it’s all about the soup base. That’s the one variable that lies totally in the restaurant’s hands. I thought this soup was good, but not the best Szechuan spicy soup broth I’ve ever had. It was a bit one-note – it didn’t deliver that rich smack of umami you get from a broth that’s been steeped in roasted bones and marrow and tendon and spices for 12+ hours until it’s dense and almost opaque. But it was tasty, and after I paid a visit to the condiment station (no photos taken – but there was a good variety of chili pastes, fresh chilis, pickled chilis, sauces, and mustard), I was able to pump the soup up almost to where I wanted it.

Friend S didn’t fare as well. She doesn’t eat meat (or rather, she doesn’t eat things with feet), so she picked the “original fish soup” base. I have ecstatic memories of Malaysian fish head noodle soup, which is fishy, creamy, fatty, tangy, and dense with flavour. But S’s soup was bland. It was not even salvaged by the (very good) fish balls and “fungus trip” (she went for it! Maybe you have guessed that this mystery ingredient was really “fungus strip”). 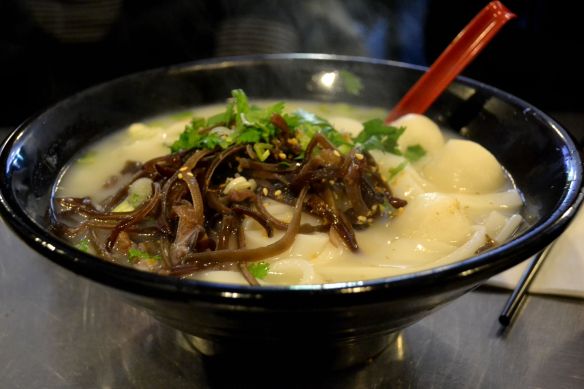 One soup at the table plainly stood head and shoulders above the rest. Friend K – indecisive until the last – won the brass ring with her Thai Tom Yum Kha Goong (I was suspicious! It’s a Chinese restaurant!), which she gussied up at the last minute with free range chicken and pumpkin. This soup was unimprovable. It was addictively tangy and spicy, but it also tasted like someone who really knew what they were doing had created it. I defy a Thai chef to lay down his best beside this soup. I mean seriously, Tom YUM. 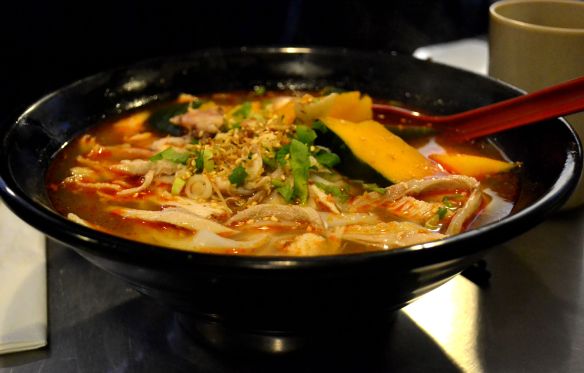 There is an honorable mention. Friend Z basically got the same soup I did, but instead of wonton he added meatball and pork skin ($1.50 for the additional selection). The meatball was flavorful and had that lovely rice-starchy bite to it that I love in Chinese cooking, and the pork skin, as far as I could tell, had been dried, fried, and then soaked in broth. Basically, a tasty meat explosion. 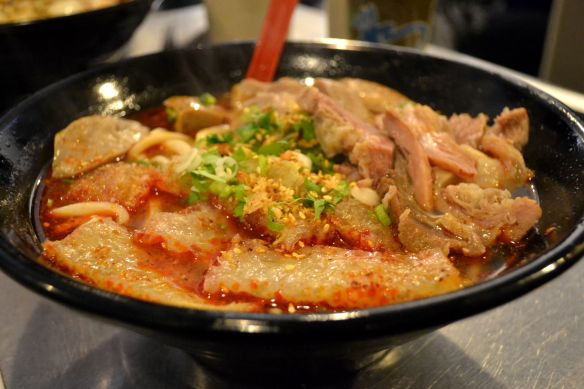 So do I recommend King Noodle? Hell yes! Sure, not everything is exceptional, but it’s solid. And for the price, unbeatable. And it powered me through another full day of copious eating and drinking. I love Seattle.

Price per person: $10 including tip