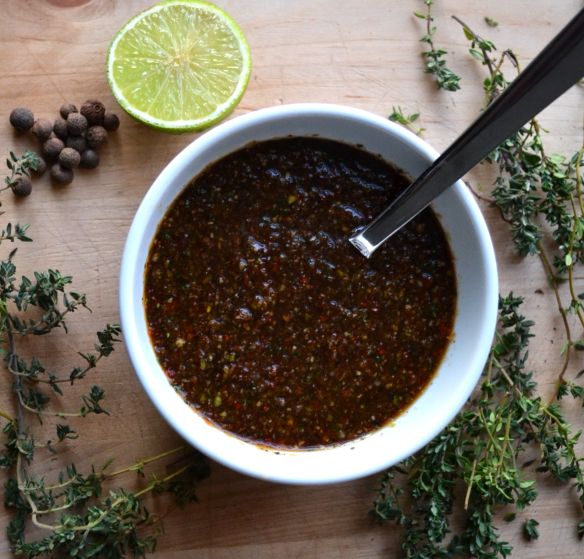 To those of you who read my blog with any regularity and/or know me personally, and who know of my ADDICTION to spicy food (I don’t think that’s too strong a word), it should come as no surprise that I have been obsessed with making, and perfecting, my own Jamaican jerk sauce. I should state a disclaimer: I have never been to Jamaica. But I’ve loved jerk seasoning ever since I first encountered a seriously fiery jerk paste while I was working in a spice shop at age 21. I’ve conducted exhaustive “research” on Jamaican jerk sauce; i.e., I eat jerk whenever I can and I try lots of different jerk sauces. London’s got a huge West Indian population, and during the Notting Hill Carnival, my favourite place to be is Golborne Road, where the food stalls are crammed the tightest, the air is so smoky from oil drum barbecues it makes your eyes sting, and you can get a plate of jerk chicken and rice and peas and plantains for £5.

There is a triumvirate (trifecta, if you will) at the heart of all great jerk sauces. This trifecta consists of allspice berries (not powder), fresh thyme (not dried), and scotch bonnet peppers (not habaneros). Each of these components is essential; no substitutions are permitted. What you do next, however, is up to you. Usually there’s garlic involved, sometimes scallions, sometimes onions, definitely vinegar, sugar, and salt. It should be SPICY.

The proper way to cook jerk anything is to grill it, preferably after marinating whatever you’re cooking at least overnight. And by “grill” I don’t mean glowing-hot-coals-done-in-20-minutes. You want indirect heat, plenty of smoke, and slow, loving, cooking until the outside of your meat is a dark woody brown and the interior is falling apart. (I read that in the West Indies, often allspice branches will be added to the coals. How cool is that?) I am really proud of the jerk sauce I made. I think it is freaking fantastic. However the proof, as they say, is in the pork (coming soon!). I did try this on fish and it was just as it should be: spicy, a little sweet, a little tangy, with the strong, slightly woody, aromatic greater-than-the-sum-of-its-parts flavour that comes when you marry thyme, allspice berries, and scotch bonnets.

Toast allspice berries in a pan over medium heat until fragrant and slightly brown. Using a mortar and pestle or spice mill (if you have one), or a food processor, crush the berries to a coarse powder. Combine with remaining ingredients in a food processor. Pulse until smooth. Taste and adjust seasonings, if necessary. Your jerk sauce will keep in a jar in your fridge for at least a month, if not longer.