This blog post tests the theory that contemporary food blogging is 95% about food photography and 5% about the food. I am very much aware that Susan eats London has been suffering lately from a paucity of posts, especially recipe posts. The reason for this is that for the past two and a half weeks, I have been without my beautiful Nikon SLR camera. I left it in a McMenamin’s in Olympia, Washington, where I had lunch immediately before going to the airport to return to London. (It was found and is being mailed to me. In my defense, I was under a fair amount of stress at the time.) But I have been cooking lovely food and testing delicious recipes, many of which I hope to blog once my dang camera finally gets here. This recipe, however, I photographed using my recently-acquired hand-me-down iPhone 3G. I will be the first to admit that the photos are not stellar. But this recipe is in true blogger-on-a-budget spirit. It’s made using the most inexpensive ingredients, it’s got great flavours, and it is something you could proudly serve at a dinner party.

To a great degree, this recipe stems from my work with a charity here in London called the Food Chain. Inspired by American charities such as God’s Love we Deliver and Project Open Hand, since 1988 the Food Chain has been providing nutrition services, including home-cooked meals, to men, women, and children who are chronically ill with HIV-related illnesses.  The idea is that we cook nice, nutritionally-appropriate food for individuals whose appetites may be uncertain and/or who may not otherwise have a nutritious diet during the week. (There are educational and other components as well; check out the Food Chain’s website if you want to learn more.) In the 20+ years since the Food Chain has been engaged in this work, the demographic of its service users has changed, and the Food Chain has tried to change with it. Many of our current service users are Asian, Afro-Caribbean, or from different parts of Africa, so when we plan meals we research and attempt to develop recipes that will be appealing to them, as well as recipes to suit the dietary needs and preferences of other service users. Our budget is limited, so our recipes also must be sensitive to issues of cost. This recipe is based on a dish I created one week when I was lead cook (running the kitchen service). I liked it so well that I decided to duplicate it at home.

A note about ingredients:

1 kilo lamb necks on the bone; ask your butcher to separate at the joints.

2 scotch bonnets, seeded and minced. If unused to handling hot peppers, wear gloves while doing this

Half a kilo (about 1 pound) okra, washed and just trimmed at the thicker ends 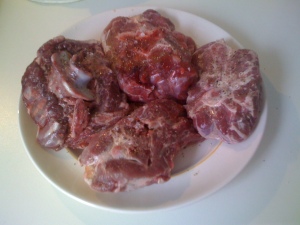 Rinse and dry your lamb necks, and then season liberally with coarse salt and black pepper. Heat the vegetable oil in a frying pan over medium high heat and brown the lamb necks on all sides. Remove from pan and set aside.

In the same pan, or in the casserole dish in which you eventually will be cooking your stew, fry the garlic, onions, scotch bonnets and all of the dry spices except the additional salt and bay leaves over medium heat until the onions and garlic are transparent and the spices start to release an aroma.  Add about half a cup of water and stir to deglaze the pan. If you’ve been using your frying pan, transfer the cooked aromatics to your casserole dish.  Add your browned lamb necks. Try to pack them into the dish snugly. Add the chopped tomatoes, just enough water to cover the meat, and the bay leaves, cover the pot, and put it in the oven to braise.

After about two hours, turn the lamb neck pieces once, and add the yam and the additional salt. Continue to cook for about another hour or until the yams are soft. 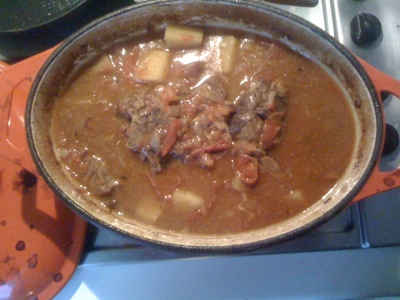 Remove and discard the bay leaves. At this point, you (optionally) also may remove the lamb neck pieces from the pot and when they are cool, strip the flesh from the bones and return it to the stew. Some people (e.g. my mother) like the meat on the bones so whether you do this is entirely up to you. If the stew seems too liquid to you, you can simmer it, uncovered, to reduce it, but this should not be necessary given the gelatin from the lamb necks and the starch from the yams.

Stir in the okra and either cover and return the stew to the oven or simmer on the top of your stove uncovered, stirring occasionally so the bottom doesn’t burn, until the okra is tender (about 15 minutes). 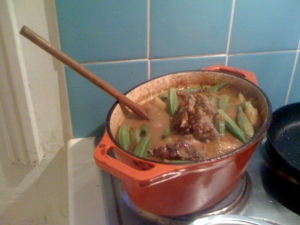 Serve over rice or with warmed flatbread, topped with chopped coriander and spring onions.