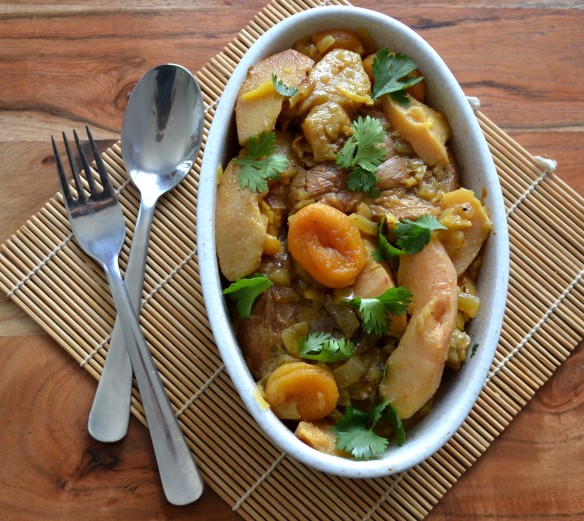 A very dear friend once said to me, after I’d served her a pigeon salad with orange and figs, “Susan, you pair meat with fruit more than anyone I know.” This is one of my favourite observations anyone has ever made about my cooking, and it is true that I love to pair meat with fruit.  That same friend is imminently expecting her first child, and I have been happily making and freezing meals for her and her partner in anticipation of their first couple of weeks at home with the baby. (I was born for this kind of task.) A few weeks ago, at Borough Market, which ordinarily is one of the most expensive food markets in London, I picked up three quinces for a pound. Earlier this week, I pounced on some Gressingham duck legs, which had been discounted at Waitrose. Gressingham duck is a cross between a wild mallard and a pekin duck, which means that it is a little bit less fatty than most duck you find in supermarkets, and its meat has a more gamey flavour. I use it whenever I can find it. Yesterday I emailed my friend, “I’m cooking you meat with fruit!”

This recipe is adapted from a lamb tagine I found in my favourite Moroccan cookbook, the marvellous Food of Morocco by Tess Mallos. Duck legs are browned in butter and then slowly stewed with saffron, coriander, ginger, onion, and cinnamon, and finished with meaty, tangy quince and sweet dried apricots. Crushed red pepper adds just a hint of heat. I’d never cooked with quince before, although membrillo, the thick plum-coloured quince paste sold in Spain by the slab and served with salty cheeses, is one of my guilty pleasures. (You can find a recipe for membrillo here.) The fruit is very hard and has a dry tang to it (i.e., is not to be eaten raw), but when cooked becomes soft and tender, almost like cooked pear, and takes on a dusky pinky-orange hue. It’s perfect with meat.

Four to six duck leg and thigh pieces, or one whole duck, quartered

2-3 cm (about an inch) of fresh ginger, peeled and minced

A generous pinch of saffron

Four cups (about a litre) of white chicken stock, or water

600 grams (about a pound and a half) quinces – should be about two – peeled, halved, cored, then thinly sliced

About two teaspoons salt plus additional salt to taste

A handful of fresh coriander (cilantro), leaves picked from stems

Sauté half the onion and the ginger with the coriander and red pepper flakes in the same pot until the onions are transparent. Return the duck pieces to the pot, crumble in the saffron with your fingers, and add the cinnamon stick and enough stock or water to just cover the meat. Bring to a boil, then reduce to a simmer, cover, and cook for about an hour, or until duck is fork-tender.

Skim off excess fat, remove and discard cinnamon stick, and serve, topped with fresh coriander leaves, with couscous or plenty of flatbread.

20 thoughts on “Duck Tagine with Quince and Apricots”