Why is it that when it’s cold and icky outside, hot food tastes so much better in liquid form? When I say it’s “soup weather’, what I really want is to be enveloped in soup. I want a soup hug. I told my father on a particularly gray and unpleasant day last week that I was making a cheddar, cider, and leek soup. He said it sounded “disgusting.” My father is wrong. This soup is GREAT – it’s like a lazy afternoon in a warm pub when it’s chilly outside, in a bowl, for lunch.

Cheddar soups can be made so they’re very thick, usually by adding potato. This soup, however, is not thick, although it is rich as hell. It’s fairly light – or at least as light as a soup made with a ton of butterfat can be – so it’s good for dunking crusty bread. If you prefer a thick soup, add one peeled, cut-up medium potato when the leeks are simmering in the broth.

I love the crumbled pancetta garnish, but you can scrap it if you want to make a vegetarian soup. (Garnish with a homemade cheddar cheese crisp, instead, or a bit of grated nutmeg, or maybe some finely chopped green apples.) If you make this soup, be sure to use a dry hard cider (e.g., not the cider you give to your eight-year-old). And use a good, sharp, cheddar that you’d be happy eating on its own. Your soup is only as good as your cheese. 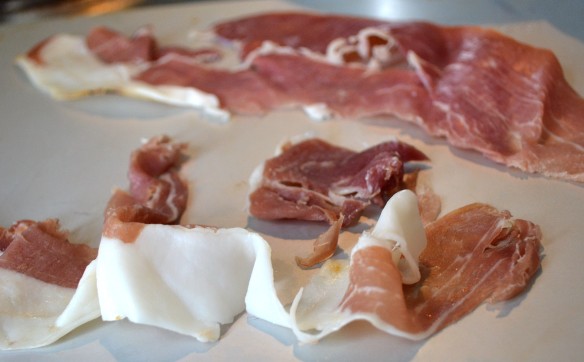 An immersion blender (stick blender) or standing blender, to puree the soup

A heavy-bottomed sauce pan or stockpot

1 medium floury (as opposed to waxy) potato, peeled and cut into chunks (optional)

Two to three thin slices of pancetta, heated on a baking sheet in your oven until crispy, and crumbled into bits (optional)

Melt the butter in the saucepan over medium-low heat and stir in the leeks.

Cook slowly, stirring occasionally, until the leeks are soft and transparent, about five to seven minutes. Increase the heat slightly and pour in the cider. It will fizz and bubble delightfully. Whisk the flour in a little of the stock to prevent it from becoming lumpy, and then add this, together with the remaining stock, to your pot. (This is the point at which you would add the potato, if using.) Reduce heat and simmer for a further ten minutes, stirring occasionally. Transfer this mixture to a blender and purée, or purée using a stick blender.  At this point you can, if you wish, pass this liquid through a mesh sieve to extract any vegetable fibres your blender might have missed. (I personally prefer the occasional bit of leek in my soup.)

Return the now-puréed mixture to your pot and bring to a gentle simmer over low heat. Using a whisk, gradually beat in the cheddar cheese, a little at a time, adding more as each bit gets dissolved in the soup. Taste and add salt and pepper as needed.

Serve in warmed bowls with a bit of crumbled pancetta on top (if you so desire), accompanied by warm crusty bread for dunking.