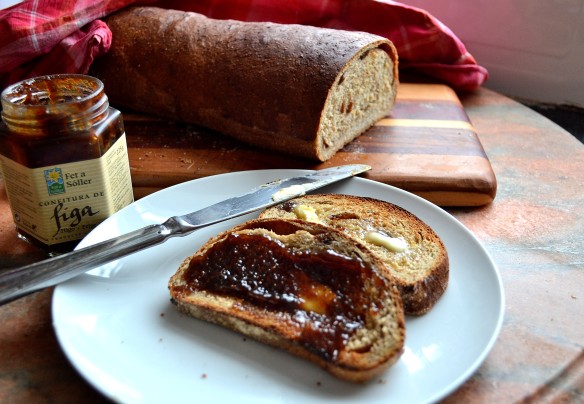 January’s obsession is bread. To be precise, January’s obsession is mastering sourdough, which I’ve always found intimidating. I AM NEARLY THERE, PEOPLE. When I am reliably turning out perfectly fluffy, chewy loaves, gorgeously slashed and floured, you can expect a (probably long-winded) blog post giving away all my secrets. Yesterday, however, I took a break from sourdough (er, I’m awaiting the delivery of a very high-gluten flour that will Make All The Difference), to make this yeasted orange cinnamon raisin bread.

I’m not a huge fan of overly-sweet, soft white cinnamon raisin bread. I want something chewy and substantial that doesn’t taste like dessert. Let cake be cake and bread be bread, and let me have bread, toasted with jam, for breakfast (unless I’m eating cake). This cinnamon raisin bread meets the requirements. It is made with half whole-wheat flour and half bread flour by volume.  (You can make this entirely with whole wheat flour if you wish.) It’s got no eggs, milk, or butter, and is sweetened with honey. It’s not too sweet, so it would also be good smeared with nut butters or thinly sliced, toasted, and served with cheese. (If you want something sweeter, double the amount of honey.) The orange is the exciting bit which makes the bread smell like a Swedish pastry shop. It’s subtle – just enough to give the bread a hint of exoticism, without turning it into cake.

I don’t like using loaf tins for bread, since I am very fond of nice chewy crusts, but if you prefer, you can of course make this in a loaf tin. I generally find bread easy and forgiving, and this bread is quite straightforward, but I do have a couple of pointers. First, make sure you knead your dough at the outset for at least ten minutes (time yourself if necessary). A bread dough that is not sufficiently kneaded won’t rise properly and has a dense, granular texture. You can feel when your dough has been kneaded enough: it becomes silky, pliant, and springy, like a firm bottom. Second, be fairly vigilant with regard to rising times so that the yeast doesn’t gobble all the honey and leave the bread with a fermented taste, or over-rise and collapse. 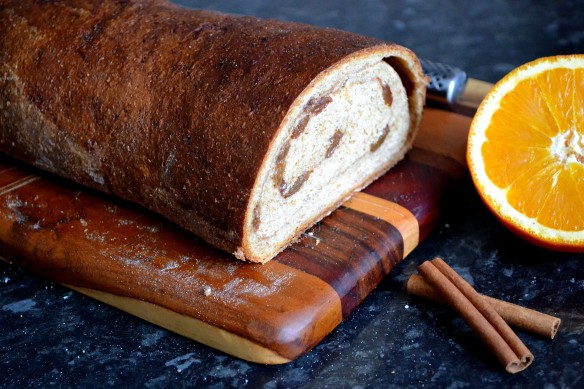 ** This recipe uses US cups and weight by volume according to my kitchen scale. If additional conversions are needed, see this chart.

To proof the yeast

2 cups (350 g) wholemeal flour, plus some additional flour for kneading

Zest and juice of a large orange (I used a navel orange, which yielded about 1/3 cup juice), plus the juice from an additional ½ orange, reserved

1 cup (135 grams) raisins or sultanas, soaked for 5-10 mins in hot water if they are stiff or dry and drained well

In a small bowl, combine the warm water and teaspoon of honey and sprinkle the yeast over the top. Set aside until yeast has started to bubble and rise.

Combine the flours, salt, and orange zest in a large mixing bowl. In yet another bowl, mix together the juice of one orange, two tablespoons of honey, and vegetable oil. Once the yeast has proofed, combine it with these wet ingredients, and stir into your flour/salt mixture using your hands or a wooden spoon. The mixture will be dry and clumpy. Gradually mix in the remaining warm water. Start with half a cup and see if you can combine the mixture into a firm but pliable dough. Add additional water very gradually as needed.

Once you’ve been able to form a fairly coherent ball of dough, turn it out onto a lightly floured surface and begin kneading. Use the heel of your hands and put your back into it. Fold, push, turn, repeat. Every now and then you can raise the dough and slam it down. I’ve been told that this stimulates the gluten. It is also fun and satisfying, and an entertaining way to startle any cats who may have wandered into the kitchen to see what’s going on. Try not to use more flour than you absolutely need. If your hands are sticky, don’t worry; as you knead, the sticky bits will incorporate into the dough. Eventually, you’ll start to feel a change in the dough’s texture and consistency. Knead for at least ten minutes, or until the dough has become pliable and slightly springy (again: think bottoms).

After you’ve finished kneading, put the dough in a lightly-oiled bowl, cover with a damp cloth, and put in a warm place to rise. (I usually turn on my oven to a low setting for about ten minutes, turn it off, and put the dough in there.) Let the dough rise until it’s doubled in bulk. This will take between an hour and an hour-and-a-half.

Punch it down to deflate it and leave it to double in bulk again. This second rising should be shorter, more like 45 minutes. Now it’s time to shape your loaf. On a non-stick surface or board, press the dough out into a rectangle about ½ inch thick. Sprinkle the dough with an even layer of cinnamon, and then the raisins. 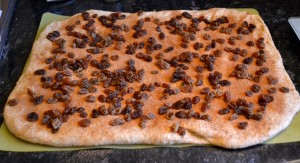 Starting from the short end, roll the dough tightly into a loaf, pinching and folding at the seams. If necessary, you can use a little water to make sure all the seams are stuck together. If you’re using a loaf tin, grease and dust it with flour and place the loaf inside for its third and final rising. Otherwise, dust a baking sheet with flour and put your shaped loaf on there. Cover it again with a damp cloth and let it rise for another 45 minutes or so, or until once again roughly doubled in bulk. (It may not rise to precisely double; if it looks substantially larger after 45 minutes, it’s ready to bake.)

While your dough is rising, preheat your oven to 200 degrees Celsius (about 390 degrees Fahrenheit). Bake in the center of the oven for 15 minutes. After 15 minutes, brush the surface with the reserved orange juice, turn the heat down to 180 degrees, and continue to bake for another 25-30 minutes, or until your bread is golden brown and the bottom crust sounds hollow when thumped.

Cool on a wire rack. Makes one large loaf of bread.