I had never heard the term “the hungry months” until I came to London. Going to farmers markets in February and March, however, it takes on resonance. There are bins of tubers, alliums, parsnips, beets, last fall’s apples, and not much else. If you want to do truly locavore eating in the chilly North, these foods are your staple ingredients. But they are cheap! And, actually, wonderfully versatile. For example, the under-regarded onion is marvellously adaptable. Last week, I bought a lot of monstrous firm yellow onions thinking I’d use them for onion jam. From that initial premise sprang this tart, in which the onion jam is modified into a gently sweet onion and apple compote, topped with beetroots that have first been slow roasted, and served on crispy puff pastry with pinenuts and rosemary. The end result doesn’t taste like winter food at all; it tastes sunny and Mediterranean, like something you’d enjoy on a terrace with a glass of crisp white wine.

This dish requires a fair bit of time to prepare, since to get the most out of the onions they need to be slow-cooked until they are essentially melted and the sugars have been fully released and caramelized. Very little of this is active time, however. Also, you can prep the onions and beetroots up to a few days before you want to serve the tart, in which case the whole thing can be assembled and served in 45 minutes or less.

A couple of notes regarding ingredients and substitutions: I marinated the beetroots in a mixture of pomegranate paste and olive oil. If you have pomegranate molasses, although the two are not identical, they are interchangeable for this purpose. If you don’t have either, for this dish you can substitute two tablespoons of fresh-squeezed orange juice for the pomegranate paste. I used all-butter puff pastry, but if you wish, you can make a fully vegan version by using puff pastry made with vegetable shortening. This recipe makes enough for two eight-inch tarts or one 12-14 inch tart. If you have miniature tart molds, you can make individual tarts and serve them as canapés. Either way, it makes a lovely first course, or a light lunch with a nice salad. 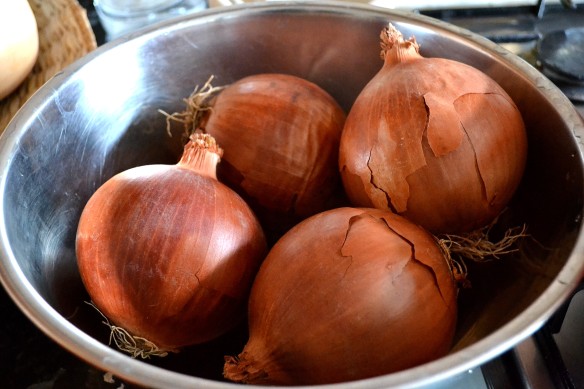 For the onion-apple compote

2-3 tablespoons pine nuts, toasted in a pan until golden

A few sprigs of rosemary, needles stripped from stems

Coarse salt, such as Maldon’s or fleur de sel

Preheat your oven to 180 degrees Celsius (350 degrees Fahrenheit). When your oven is hot, wrap the beetroots individually in aluminium foil (they roast better this way) and roast for about an hour and a half, or until tender when pierced with a fork.

While the beetroots are roasting, combine the chopped onions, honey, 1/3 cup olive oil, salt, pepper, and thyme in a heavy bottomed pan. Toss to coat and cook over medium-high heat, stirring occasionally, until the onions have started to soften, color slightly, and release liquid, about five to seven minutes. Reduce heat to low, cover, and simmer for an hour. You shouldn’t need to stir, but feel free to do so from time to time if it makes you feel better.

After an hour the onions should have reduced in bulk by about half and be very soft and golden. Stir in the port wine, red wine vinegar, and the apples. Increase heat slightly and cook, uncovered, for about 30 to 45 minutes, until the apples are soft and most of the cooking liquid has evaporated.

When the beetroots are cool enough to handle, slip them out of their skins. (At this point you can set your ingredients aside until you are ready to make your tart.)

Slice the beetroots into rounds, and toss with 2 tablespoons each olive oil and pomegranate paste.

To assemble the tart:

Preheat your oven to 200 degrees Celsius (about 390 degrees Fahrenheit).

Sprinkle a sheet of parchment or wax paper with a little flour to prevent sticking and roll your puff pastry to a thickness of about 2 mm (slightly less than 1/8 inch). Transfer to the spring-form pan and press in firmly. Trim around the pan and crimp the edges. Poke the base of the pastry repeatedly with a fork and pre-bake for 10 minutes. You can line the pastry with pie weights to prevent puffing, but it’s not strictly necessary; just deflate the pastry by whacking with the flat side of a fork or spoon.

Spoon in the onion-apple compote to a depth of about two centimetres (3/4 inch) and top with sliced beetroots arranged in overlapping rings. Bake for about 20 minutes, or until the crust is golden-brown. Cool on a wire rack for about ten minutes, then drizzle a little extra-virgin olive oil over the top, and sprinkle generously with pine nuts, rosemary needles, and coarse salt. Serve warm or at room temperature. Makes about 10-12 servings. 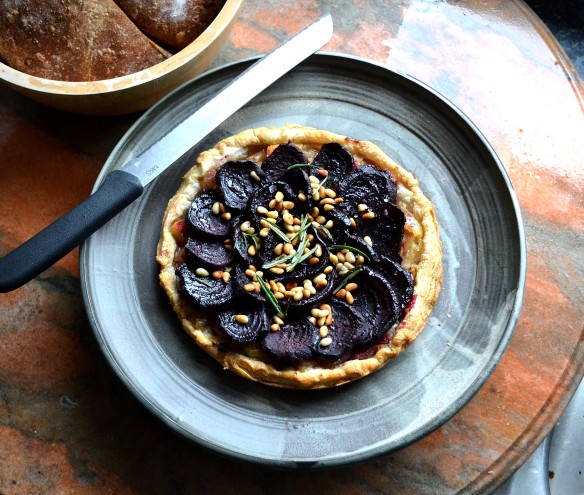