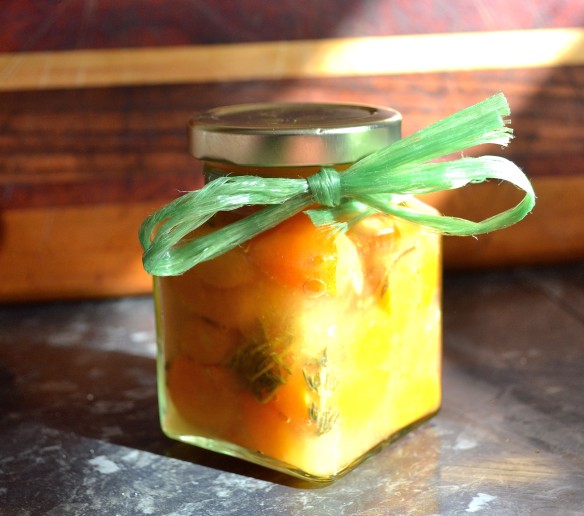 When I lived in Seattle, I had a chef friend who on slow Sundays would invite me to the restaurant while he developed new dishes. The restaurant was near the Pike Place Market, and on clear afternoons the sun shone from the west, glinting off of Puget Sound, illuminating and warming the timbers in the restaurant. I would get tipsy on prosecco or minerally white wine, and taste the nascent dishes. I only remember one thing I tried, but it made such a strong impression on me that I think about it still. Buttery yellowtail sashimi, studded with finely-sliced tiny golden pinwheels, crunchy flakes of salt, dots of basil purée, and extra virgin olive oil. It was the little iridescent pinwheels that threw me. They were deeply tangy, salty, and aromatic, with a concentrated, citrusy flavour that threw the taste of the rich fatty fish into relief. “What is this?” I asked. “Preserved kumquats,” he said.

It took me years to get around to preserving my own kumquats. I experimented with making sashimi with finely chopped preserved lemon rind, grapefruit segments, and blood orange. All delicious, but not quite the striking contrast I remembered. Finally, a month or two ago, I finally preserved my own kumquats. I adore preserved lemon, but preserved kumquats have a flavour that is at once cleaner, more subtle, and more pungent. I’m not saying I like them better for everything, but for some things – sashimi, for example, and some salads – they’re extraordinary. The rind is thin and delicate, and you can use the whole fruit, both pulp and rind, in your recipes.

I followed this recipe from Vanilla Garlic, but the process is so simple very little “recipe” is needed. The kumquats are preserved in salt – a lot of salt – and lemon juice, and whatever else you feel like adding for flavour. After about two weeks, they’re ready to use. They only improve the longer they sit around. 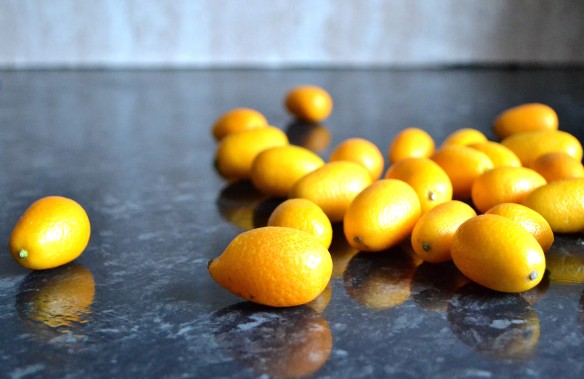 For each one-pint (half-liter) jar:

Juice of two to three lemons

Scrub the kumquats well under running water and rub off the little green tips at the ends. With a sharp knife, cut an incision into each kumquat to a depth of about 1/3 of the kumquat. The larger kumquats can be incised with a criss-cross. Spoon a heaping tablespoon of salt into the bottom of each jar. Using your fingers, stuff each kumquat with a generous amount of salt. Layer the kumquats into the jar, sprinkling additional salt between the layers, and squashing them down firmly as you go. If you’re using fresh herbs, you can layer these with the kumquats.

Continue this process until the kumquats are about an inch from the top of the jar, then pour in the lemon juice to cover, and top with a little more salt. Close the jar firmly, tip it back and forth, and let sit at room temperature for about 48 hours.  Then put it in your fridge to pickle. For the first ten days, flip the jar from top to bottom about once a day, then do it when you remember.

In two weeks time, your kumquats will be ready to use. Just pick them out of the jar, rinse off the excess salt, if necessary, and use as you would preserved lemons. 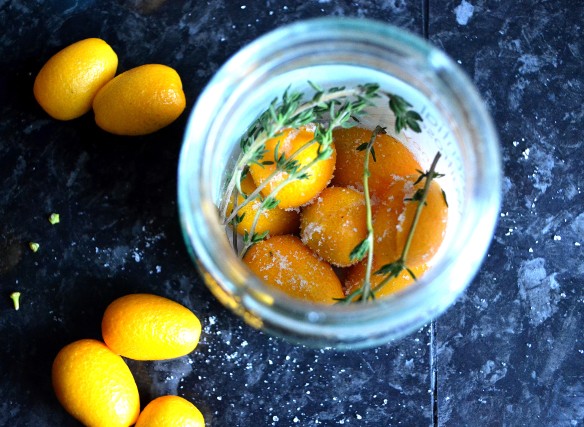 And … some preserved kumquat recipes. Get pickling!

Pomegranate and Basil Marinated Beetroot with Preserved Kumquat and Pistachios