My favorite fact about chutney: the word derives from the Sanskrit word caṭnī, meaning to lick. Chutneys are, loosely, a mixture of vegetables or fruit (or both) and spices. Indian chutneys can be cooked or raw, blended or pounded, pickled or fresh. In the West, chutneys are usually a combination of fruit, savory spices, sugar, and vinegar.

My palate for Western chutneys developed late. For a long time, I thought they were yucky. Salty spicy vinegary fruity pickle? Blech. Perhaps my aversion was a consequence of having to politely eat haroseth (a mixture of apples, wine, chopped nuts, and spices traditionally served at Passover seders) at an early age. But. Eat enough tagines in which apricots and quince have been slowly simmered with meats, salty cheese and French fig jam, cantaloupe and prosciutto, and eventually one starts to enjoy, albeit reluctantly, the contrasting tastes of sugar and salt, fruit and vinegar and spice in Western chutneys. Another fun fact: Western cuisines tend to pair ingredients that share flavour compounds, whereas many Asian, and particularly East Asian, cuisines tend to pair contrasting ingredients.

I made this chutney to go with a cheese course in an elaborate themed multi-course meal. It does contain two somewhat hard-to-find ingredients: huckleberries, a fruit native to the Western United States, much beloved by bears, and somewhat similar in appearance and flavour to blueberries, but wilder, more fragrant, and fruitier. (Unlike blueberries, as far as I know, huckleberries cannot be cultivated.) If you cannot find huckleberries, a mixture of blueberries and finely chopped fresh apricots would be a reasonable substitute. The second unusual ingredient is dried ñora peppers, a mild, earthy Spanish pepper that is the key ingredient in traditional Romesco sauces, usually sold dried and strung together like Mexican chilli peppers. You can get ñora peppers at specialty Spanish food stores or online; in Britain and Europe, you can order them from http://www.souschef.co.uk. (Disclaimer: Sous Chef is my lovely friend Nicola’s company.) The dried ñora pepper provides depth and a certain inexpressible something to the chutney, but I suspect that if you omit it, the chutney will still be delicious.

Even though it is fig season, I used dried figs in this recipe for two reasons. First, they are much less expensive than fresh figs. Second, I really like the meaty chewy exoticism of dried figs. Pair this chutney with cheeses (really, I can’t think of a single cheese that would not be complemented by this chutney – salty sheep cheeses, aged cheddars, tangy goats, and gooey raw milk cheeses all would be delighted to share space with it on a cracker), cured meats, or as a condiment with roast pork. Or make loads, jar it, and give it away as gifts. 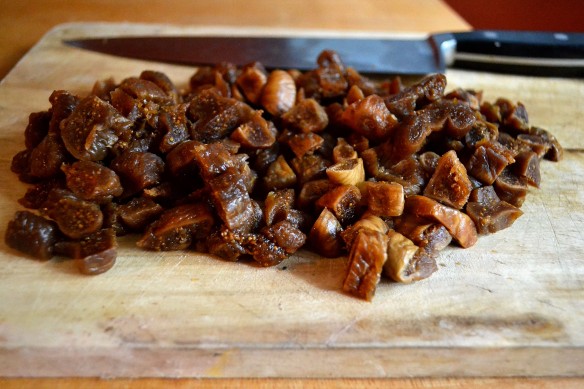 Combine ¾ cup (180 ml) of the balsamic vinegar with 1 tablespoon of sugar and simmer until the mixture has reduced by two-thirds, then set aside.

Toast the mustard and nigella seeds in a dry saucepan until the mustard seeds begin to pop. Reduce the heat, add the olive oil, and sauté the chopped onion with the ñora pepper, salt, and black pepper until the onion is transparent but not brown. Add the dried figs, water, cointreau, remaining ¼ cup (60 ml) of balsamic vinegar, lemon juice, cinnamon stick and star anise. Simmer, covered, for 10 minutes. Stir in the huckleberries, grated ginger, and lemon zest, and simmer for an additional 10 minutes. Remove the cover from the pot, and continue to simmer until most of the liquid has evaporated. Turn off the heat, stir in the reserved vinegar syrup, and transfer immediately to crocks or, if you wish, sterilized jam jars.