The thing that I love most about baking in the American South is the blithe disregard for caloric content and cholesterol. A close second is the Southern fondness for, well, stickiness. Gooey frostings and sticky caramel reign supreme. Baked goods are literally finger-licking good, and it is a glorious thing. The cinnamon roll – ostensibly, an innocent breakfast roll, but really a wolf in sheep’s clothing – in many ways epitomizes what I love best about Southern cakes. It begs to be eaten with the hands. It’s warm and yielding and fragrant and delightfully, decadently sticky. If you’re watching your waistline, after a proper cinnamon roll you may as well skip meals for the rest of the day. Southern-style cinnamon rolls don’t play around.

There are a number of things that I don’t do well. Among them is creating low-fat options from things that, rightfully, are meant to reign at the top of the caloric ladder. Let cinnamon rolls be cinnamon rolls, I say. You’ll be happy to know that this recipe does not stint on the butter. The buns are rolled up with a mixture of brown sugar and white; the brown sugar combines with the butter and becomes wonderfully caramelly as it bakes. I think that frosting on cinnamon rolls should be gooey and unctuous, so this frosting is made with both cream cheese and sour cream. You can knock these out in a few hours – two and a half or less, including rising time, if you wish – but I firmly believe that sweet yeasted things need a cold rise. So my recommendation, and how I’ve written this recipe below, is that you start baking these the night before you want to eat them. Pop them in the fridge for the second rise, give yourself an hour and a half on the other end, and they’ll be ready in time for brunch. 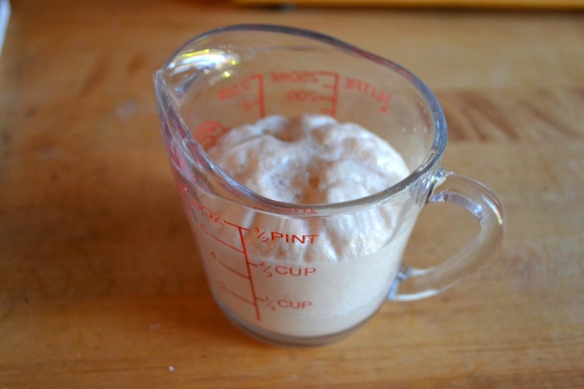 Ideally, a stand mixer. You can make these without one, but it will be stickier and messier.

½ cup (one stick, or 113 grams) butter, softened to room temperature, plus additional butter for greasing

½ cup (one stick, or 113 grams) butter, softened to room temperature 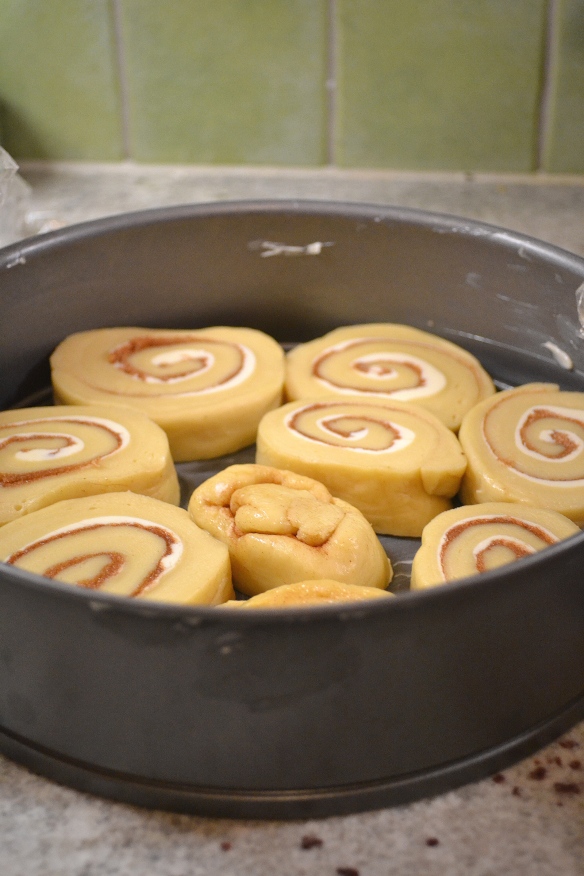 Proof the yeast in the warm water with the sugar until it is foamy and excited.

In the bowl of your stand mixer, or in a mixing bowl, whip the butter together with the sugar and salt until it is creamy. Add the eggs, one at a time, reduce speed, and add the milk. Gradually mix in the flour until it is thoroughly combined, switching to a dough hook when the dough becomes too stiff to mix. It will still be quite soft and sticky. That’s what you want. Mix for another five minutes (longer if mixing by hand), then transfer to a greased bowl, cover, and let rise in a warm place for an hour or until double.

About an hour to an hour and fifteen minutes before you want to bake your cinnamon rolls, combine the brown sugar, white sugar, and cinnamon for the filling. Take the dough out of the refrigerator, spread some parchment paper on the counter (do not use waxed paper; waxed paper and yeast doughs do not get along), flour it liberally, and roll the dough out into a 12” X 20” rectangle.  Spread the butter on the rectangle, leaving a small margin at the edges, and sprinkle with the cinnamon sugar mixture, using all of it. If you wish, you can also sprinkle on some chocolate chips. When I made these, I divided my dough in half, and made ½ batch using 100 grams of chocolate chips, and ½ without. Public opinion was equally divided. If you’re a purist, skip it, if you’re a chocolate fan, go for it.

Roll the dough from the long edge tightly, and slice into rounds about 1.5 inches (3 cm) thick.  You should get approximately 16 cinnamon rolls per batch.  Slice the rolls more thickly if you want fewer, taller cinnamon rolls. Place the sliced rolls into a greased baking pan (two springform cake pans work well, or you can use a square baking tray), and allow to rest for about 25 minutes.

While the dough is resting, preheat your oven to 350 degrees Fahrenheit (180 degrees Celsius). Bake the cinnamon rolls on the center rack of the oven for 30-35 minutes, or until golden brown.

While the rolls are baking, make the topping. Whip the cream cheese together with the vanilla and butter, then add the sour cream. Gradually add the powdered sugar until thoroughly combined.

When the rolls are finished, remove from the oven and allow to cool for five minutes. Take the warm rolls off the baking trays and place directly on a rack, and frost liberally. Serve warm. 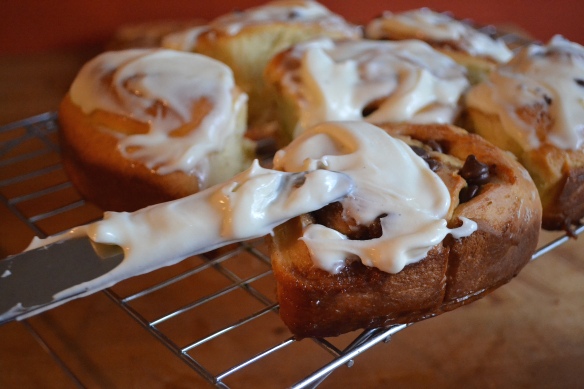