Like many of the best things I have done, the decision to go shrimping was hatched around my dinner table, during an impromptu Sunday night dinner party. My friend Larry, a self-described Shed Boy (he has forsaken a traditional career to live meagerly, work less, and create things), abruptly announced—he is usually abrupt—that he and his friend Steve were going shrimping for Hood Canal spot prawns that Wednesday. Did I want to come? I had been in a bit of a funk for a while, not writing, hardly cooking, and feeling aimless. I missed London. But spot prawns are a rare treat, seldom available far from their natural habitat (they deteriorate quickly). When I tell people that I have never had seafood as exquisite anywhere as in the Pacific Northwest, spot prawns are one of the local delicacies that top the list.

The spot prawn is actually a shrimp, not a prawn. The distinguishing feature, apparently, is that shrimp have side flaps that overlap the first through third abdominal segments, while prawns have first and second anterior segments that are about the same size. Spot prawns are beautiful, alien creatures, nearly as large as langoustines, with bright pinky-orange spotted shells and long waving striped antennae. The flavor of spot prawns has less in common with Gulf or tiger shrimp, and more closely resembles their crustacean cousin, the lobster, but it is sweeter and more delicate. Drown them in a rich sauce, cook them too long, and you’ve ruined them.

Tuesday afternoon I turned up at Larry’s house with a sack of food (my assignment was to feed the three of us; I took this very seriously), and then we drove to Boeing Field, where Larry keeps his beautiful, immaculately maintained 1964 Cessna. As the crow flies, Seattle is about forty miles from Port Townsend, where Steve was waiting for us. In a propeller plane, that’s about a twenty-seven minute flight. Long enough for me to look queasily down at the water beneath me, snap a couple of photos of Seattle’s skyline, and then forget—nearly—my fear of heights as I watched the sun dance on the Hood Canal. The Hood Canal, a lovely, pristine body of water, was our ultimate destination; it is a natural waterway, one of Washington’s fjords, created during the late Pleistocene era (about 13,000 years ago).

From Port Townsend to Pleasant Harbor Marina, where Steve moored his lovingly-refurbished sailboat, it was just a short drive. There, in the tiny cabin, we would spend the night, so as to make the most of the day. In the 1970s, spot prawns were severely overfished in local waters. The Department of Fish and Wildlife stepped in, and now spot prawns are thriving. In fact, spot prawns are one of the most sustainable local seafoods. This is, in part, because Fish and Wildlife continues to strictly police shrimping. The shrimping season—at least for non-native Americans—is limited to four four-hour stretches in May, on two Wednesdays and two Saturdays; shrimpers requires a license (about $11), and each individual is limited to eighty prawns per fishing day.

Steve woke us at five a.m. There are few places as cold as a chilly boat on frigid waters in the pre-dawn. The weather in Seattle was predicted to be sunny and warm. In the Hood Canal, misty clouds hung low above the water, and the boat was silvered with frost. It would take us two hours to reach our destination, a Top Secret location where Larry used to shrimp when he was a commercial fisherman. We needed to be in precisely the right spot, traps baited, when the clock turned nine, so that we could drop them without wasting a moment’s time. When you have only four hours to reach your quota, every minute is precious.

Every shrimper has his (or her) trick for luring prawns. Friskies cat food is popular bait. Steve stacks cat food with expensive tinned tuna in oil, the lids cracked just enough to spread the scent without losing the contents. When we dropped our traps at nine sharp, an oily slick glistened on the water. “That’s what’ll bring ‘em in,” Steve said with satisfaction. He was right.

I, the virgin shrimper, was bouncing with excitement. When could we haul the traps up? Forty-five minutes after we dropped our first trap, primarily to shut me up, I think, Steve agreed to pull up a trap to see how we were doing. It was TEEMING with prawns, forty or more. We would reach our quota with our first four pulls. Each trap contained dozens of prawns. (Fish and Wildlife decrees that any prawns exceeding the permitted amount be thrown back in the water as quickly as possible; they are fragile creatures and die quickly when out of the cold water that is their habitat.)

Some shrimpers use a pulley to bring their traps up. We were not so fancy, and we pulled them without mechanical aids. When pulling a trap, it is best to do so quickly and steadily. Without constant motion and the pressure of the water upon them, the shrimp will swim away. It is hard work; I now know how sailors get their brawny forearms. When I pulled up a trap, a large Dungeness crab was on top, but it swam away as the trap reached the surface. As I emptied the prawns into a waiting bucket, I saw many had been decapitated. The crab had been feasting on the captive prawns.

I do not sail, I cannot pilot a plane, and I’m not particularly strong. But I wanted to be useful, not merely window dressing. I assigned myself the job of counting the prawns. And, it turned out, the job of murdering them. Spot prawn heads contain an enzyme which, after they die, quickly disseminates through the body, turning the flesh mushy. If one does not intend to bring home spot prawns while they’re still alive (something that’s really only done by commercial enterprises, for fancy fishmongers), then the heads need to be separated from the bodies, and the prawns that one does not intend to immediately eat frozen as quickly as possible. To decapitate a live spot prawn, one grasps the head and tail in either hand (gloves are necessary; they are spiny things) and gives a firm twist, as if opening a bottle. This I did to 240 spot prawns. After the first five or so, one stops being squeamish. It was, at least, a quick and merciful death. Back at the marina, a Fish and Wildlife inspector checked our tally, and then it was a short flight back to Seattle.

For several weeks after my jaunt, I agonized over this blog post. Shouldn’t I include a recipe? This is, after all, a food blog. But with spot prawns, less is definitely more. They are best cooked simply and quickly; anything else is gilding the lily. I have served them sautéed with cherry tomatoes and basil on squid ink pasta, and it was beautiful. One can also grill them over hot coals, basted in olive oil, but my favorite way to eat them is cooked in the shell in salted water for no more than two minutes, with drawn butter. Garlic in the butter does not go amiss. 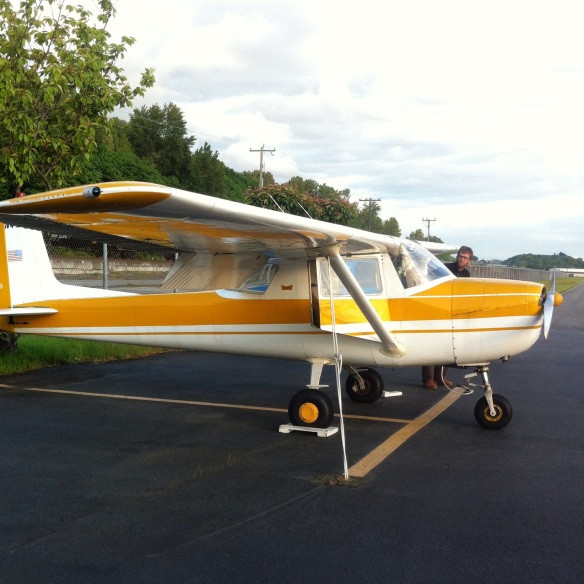 Seattle, as seen from a tiny plane. 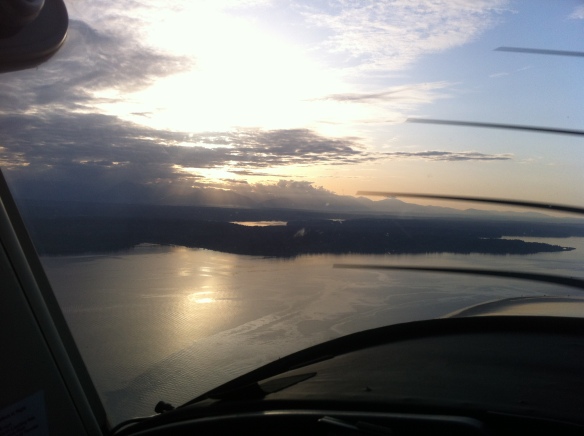 Hood Canal, from above

Setting out from the marina in the cool dawn

Fog hanging over the water 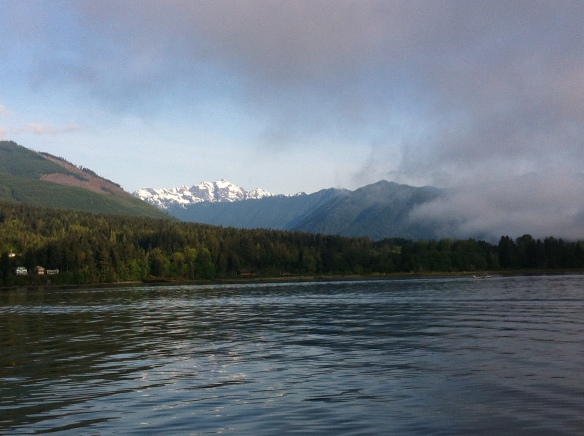 Mount Walker, on the Olympic Peninsula

Holy crap, check out all those shrimp!

Well, would you look at Shrimpy Sue 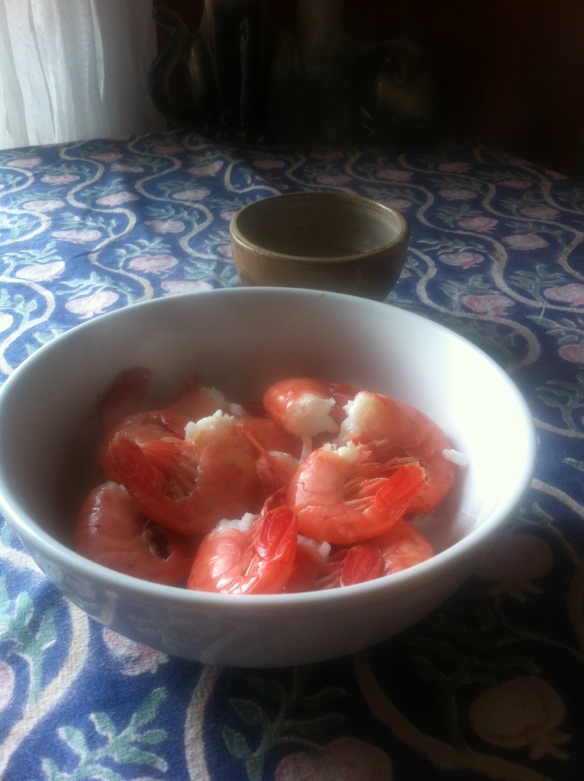 12 thoughts on “Shrimping in the Hood Canal”