I admit I am as much of a food fad follower as the next urban foodie. The words “regional cooking” immediately make me start drooling, particularly if they’re paired with words like “pickle” and “spicy.” So of course I had to try the new Dongbei restaurant opened by the group behind the Legends chain as soon as I read the favourable review in Time Out, and enlisted reliable food buddies J & T to join me.

I had high expectations but for the first time ever, I think, Guy Dimond let me down. Two words come to mind: Salt. Lick. Now I’m not a salt-o-phobe. I may even be a salt-o-holic. I have been known to stand by a tub of Maldon sea salt and eat it with my fingers. But this meal was aggressively salty, kilo-of-salt-bloat-the-next-morning salty. I could feel my tongue swelling in my mouth as I ate.

The interior of the restaurant is cute. In the upstairs, which I highly recommend over downstairs, the walls are pinky-mauve and decorated with old black and white photos (these may explain the intriguing reference to “the 1910s classy ambiance” in the menus) and black-and-white subway tiles. It felt kind of like the Orient Express.

From the cold starters menu, we ordered cold mixed vegetable, the first item on the menu. My photo of this dish is very beautiful.

But upon inspection you will see it consisted only of uneven sprigs of coriander, julienned green pepper and hot pepper, sliced mystery vegetable (bamboo shoots?) sesame seeds, and salt. A lot of salt. (Maybe you can’t see the salt upon inspection, but trust me, it was there.) If it came as a side to be added to a soup I would be delighted with it (although wouldn’t pay four pounds for it, which is approximately what it cost), but as a starter it underwhelmed.

The intriguing-sounding pork, pickle and vegetable dumpling turned out to be steamed dumplings stuffed with pinkish oblongs of pork and rice starch. If there was a pickle we didn’t see or taste it. Nor were there vegetables, unless they’re counting rice starch as a vegetable. The filling tasted, unfortunately, like mystery meat, or possibly like spam, except there’s more meat in spam. The dumplings were served with a dipping sauce that may have been the saltiest thing we ate all evening. As far as I could tell, the dipping sauce was made of soy sauce, some chopped chilis, and extra salt in case the soy sauce was lonely. 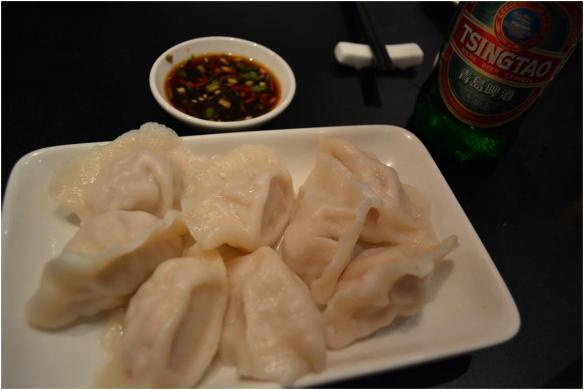 The lamb skewers were the undisputed star of the evening. Juicy tender meat, with a satisfying chewy char from the grill and dusted with sesame seeds, ground chilis, crushed chilis and possibly cumin (this last may be wishful thinking on my part) that formed a nice crust on the caramelized meat. Tasty. 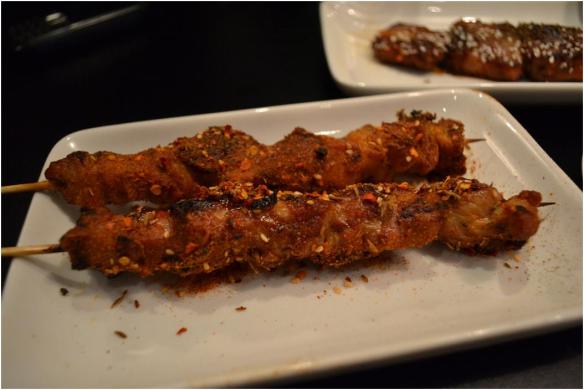 The squid skewers, however, were inedible. Sadly I forgot to take a photo of them so I can’t substantiate this statement with visual proof but they were completely RAW at the centers. As in undercooked, not as in delicious squid sashimi. They were actually translucent. I was the only person at the table to taste the squid, and in addition to being UNCOOKED (I can’t emphasize this enough – it is an unpardonable sin) I am sorry to say that they also tasted not very fresh and as if they either hadn’t been cleaned well or had sat with squid that wasn’t cleaned. We actually sent this back, which is something I never do.

The pork and glass noodle, highly recommended by Time Out, had potential. The pork belly was braised and flavourful, and served on top of the noodles with a rich brown aromatic sauce, almost a broth. But the dish could have used something with a bit of crunch. And again, it was way too salty.

The spicy chicken hotpot at least had some texture from the green onions and peppers and some heat from the dried chilies, but I missed the brightness of acidity. Also, because the chicken was bone-in (something I normally favour because bones = flavour), it was treacherous to eat. The chicken pieces seemed to have been chopped after they were cooked, because I kept pulling spiky bone shards from my mouth. This may be an arbitrary rule, but I feel it is a good one: if it comes in a broth serve it on the bone. If it is more like a stir-fry then please give it to me boneless, as chances are I am not cautiously slurping it but shoveling it into my mouth on rice. 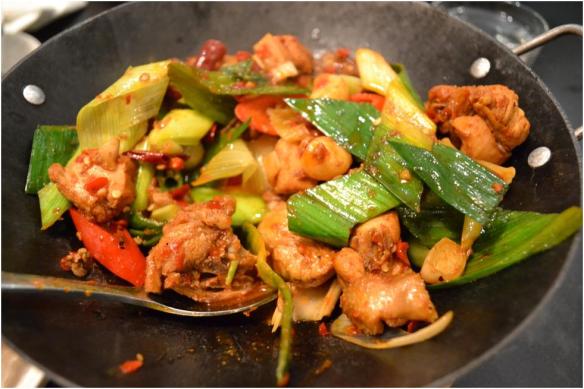 In this review I have helpfully listed these items in the order they appear on the menu but in fact they arrived at our table as follows:

(Long pause after ordering. We all feel very hopeful because obviously everything is being freshly made JUST FOR US.)

(Longer pause. 10 minutes passes. Look anxiously around for server who, having collected all beer bottles within a 50 foot radius has evidently left the premises. Find different server. Ask for skewers.)

(Lengthy pause. Ask about cold mixed vegetable starter and squid skewers. Server apologetic. Maybe they planted the vegetables and they are growing while we eat our dinner?)

(Another long pause, while we desultorily pick spare rib fibres from between our teeth and contemplate a dine-and-dash.)

Finally (and this is important) ALL OF THE SERVICE CHARGE GOES TO THE RESTAURANT AND THIS IS MANDATORY. Fay Maschler, in her Evening Standard review, said that the service charge tacked onto the bill goes to the house, not the servers (not uncommon in the UK), and recommends that diners request the service charge be removed and diners leave cash tips. But when we asked our server to take the service charge off, she said she was not allowed to do so. I was gobsmacked and started to mount all sorts of American lefty lawyerly protests, but she pointed out that at the bottom of the menu it states a 10% service charge would be added to the bill. This is true. It does not say “discretionary”, which heretofore I had assumed was simply British politesse. She confirmed that management received the full service charge from each bill and the servers got none of it.

J said, “this is Chinatown, Susan.” We ended up leaving her a cash tip, but whereas I might normally be persuaded to go back and give this restaurant a second chance (everyone has bad nights, after all, and someone has told me that the tripe is stellar), now I will not do so ON PRINCIPLE, or unless drunk and desperate.

Also, FYI if you decide to ignore my well-founded advice and give this place your money anyway, there is a trick to getting in the door. I can’t stand it when people whine about ‘language barriers’, particularly when they’ve made the decision to go to a restaurant in, say, Chinatown, but there was some serious confusion on arrival. A man was guarding the entrance to the restaurant. Literally. There was no walking past him. The trick is, when he asks you if you want to make a reservation you say several times firmly, “no, I want to eat now” until he fetches someone who will actually seat you.

1 thought on “Manchurian Legends: Not so Legendary”