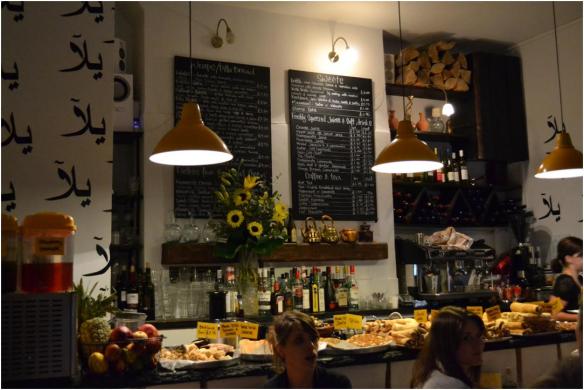 I have a new favourite cheap eats destination. (By “new” I mean “new to me.” Yalla Yalla has been open in Soho since 2008 and in Mayfair since 2010. I could weep at all the meals I could have eaten, but did not eat, at Yalla Yalla.)

Yalla Yalla could so easily have been precious. It is in Soho. It is trendy. It bills itself as serving “Beirut Street Food” (showing that it has me, and a whole lot of other people, dialed down). It could serve microscopic portions and charge an outrageous amount for alcohol. But Yalla Yalla is not precious, except perhaps literally, like my precious bottle of barrel aged single batch bourbon that my friend Charles gave me for my birthday.

Yalla Yalla is tiny. Their website claims they seat 28, but I think they must be counting the three outdoor tables at which they somehow manage to cram four persons apiece. They have also managed to cram as many tables as possible into the restaurant itself, which means you are basically in your nearest neighbours’ armpits. I don’t mind this so much because then I can scrutinize what they’re eating and whether I WANT SOME. (Answer: YES, OF COURSE I DO.) Also, Yalla Yalla is frequented by hot chicks (see Ex. A, above). Hot chicks who like to stuff their faces with delicious Lebanese food get an A+ from me, and I am happy to be in their armpits.

I’ve eaten at Yalla Yalla twice and despite gorging indecently and getting sozzled both times, I managed to not spend more than £15. I DO NOT UNDERSTAND HOW THIS WAS POSSIBLE, but I do not question why.

My first visit we ordered the £6 makale samak (fried prawns, calamari, whitebait and aubergine). Sorry, I DO NOT have a photo of this or of anything else we ate that first visit, since I didn’t bring my camera. But do I need to remind you that you would be LUCKY to pay £6 for fish and chips and it would probably taste like crap? This plate of crispy deep-fried battered goodness was literally the size of my face and it is a WINNER. All the seafood was fresh and perfectly cooked, the batter was light, and the thinly sliced fried aubergine on the bottom of the plate was comfortingly moist, hot and yielding inside its crispy shell. It was served with a nice mint and yogurt dipping sauce. Soujoc, lebanese sausages, made with spiced lamb and grilled and served with plenty of lemon, were flavourful and satisfyingly chewy, but not particularly memorable.

The Halloum Meshoué (£4.25), however, is a revelation. A voice in my brain says, “it’s just grilled halloumi with olives and tomatoes” but it was hot and salty and perfectly browned and texturally delightful with the meaty olives and bright fresh tomatoes.  It was so good, I had to order it a second time. 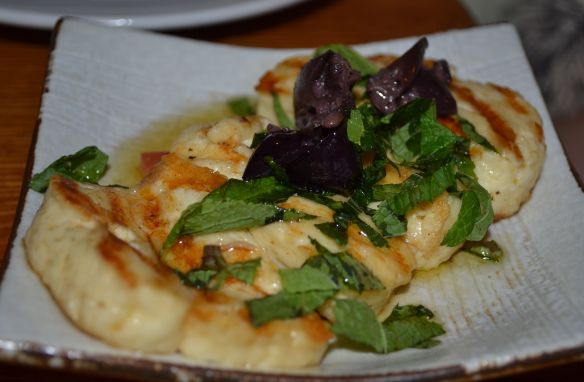 The Kibbé Nayyé (£5.50), or lamb tartare, is somewhat different to how I’ve had it before. The spiced lamb mince is very fine and mixed with bulgur, which gives it a nice heft and smoothes out the flavour of the lamb. (I love raw meat, but one of my dining companions was not so keen.) The meat is shaped exactly as if someone took the mince and squished it in their fist before dropping it on the plate, which someone probably did. 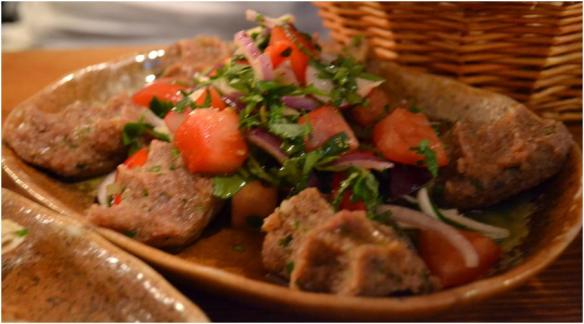 Sfiha (£3.75) is gorgeous – lovely doughy triangles of hot pillowy bread topped with a dusting of fine lamb mince, pomegranate molasses, and pomegranate seeds, and served with a wedge of lime. Friend V did not like the fact that the menu describes sfiha as a pastry “filled with minced lamb” whereas sfiha is more bread than pastry and it is definitely not filled. A valid criticism. Yalla Yalla take note! 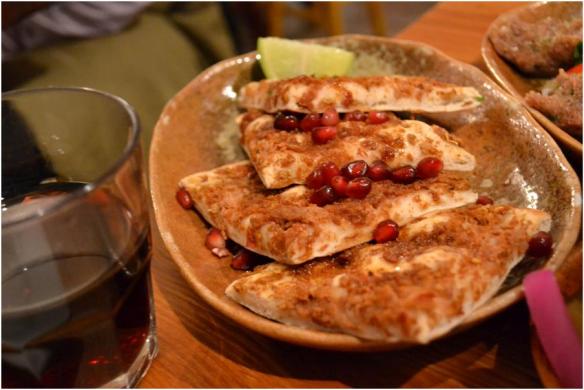 For a main we ordered the moussakaa (£8.50), which is prepared differently in each region that makes it. This was a warming tomato and aubergine stew, made with chickpeas and red peppers, and served with rice vermicelli. We ate about half of the plate before I remembered to take a picture, but the portion was freaking enormous. This is how it looked after three of us took some on our plates:

Everything is accompanied with their lovely fresh pita bread. We had second helpings of the pita bread (FREE!). Also free are the olives and pickle that they give you at the start of the meal. 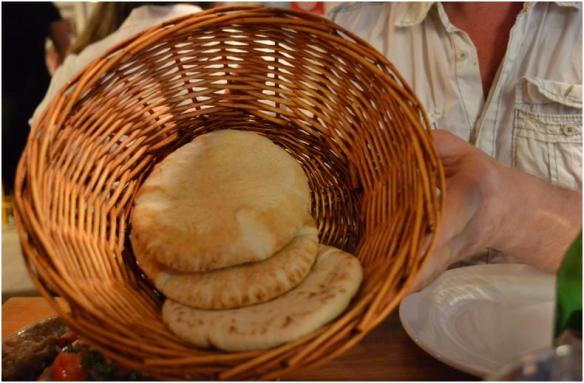 Service is not included in the bill, but even with three glasses of wine (the Lebanese Pinot Noir sounded like a good idea, but trust me, it wasn’t), two beers, and a nice tip, it came out to under £15 per person. (HOW?? HOW????) In Arabic “yalla yalla” means “come on,” or “hurry up” or “let’s go!” and all I can say is yalla yalla your ass over to this little gem of a restaurant.

Price per person: under £15 including tip