I don’t understand why it is SO DIFFICULT to find affordable fresh fish in London. England’s an ISLAND, people!

Anyway, two and a half hours away by Eurostar is a seafood mecca. It’s called PARIS, which is where I am as I write this. You can hate me later. Today at the Rue Montorgeuil market I bought four beautiful, extremely fresh sea bass (en français, “bar”) for 10 euros and half a kilo of girolles for 2 euros. My philosophy with fish is that the fresher it is, the less you want to mess with it. This roasted sea bass with melted leeks and girolles I cooked tonight (with a little kitchen prep help from my mum) was très simple mais delicieux! Bon appétit!

½ kilo (about a pound) of girolles 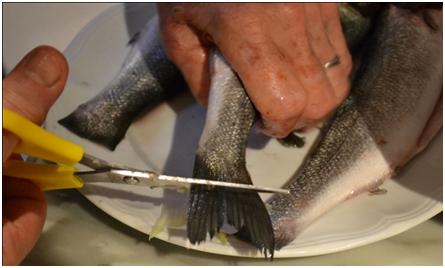 Preheat your oven to 220 degrees Celsius (425 degrees Fahrenheit). Lay the sliced leeks in a baking dish large enough to fit all of your fish, sprinkle leeks liberally with salt and pepper, and drizzle with two tablespoons olive oil. Season the fish inside and out with salt and pepper, stuff cavities with parsley, and lie fish on the bed of leeks. Drizzle with an additional two tablespoons of olive oil and ¼ cup of white wine, and roast in the middle of your oven uncovered for 20 to 25 minutes, or until skin has started to crisp and fish is tender to the touch.

While the fish is roasting, heat the remaining olive oil in a heavy bottomed frying pan, then add the girolles and about a teaspoon of salt. Cook over medium high heat. The mushrooms will release a lot of liquid and shrink a good deal; you want to cook them until the liquid has evaporated. Once the liquid has evaporated, add the remaining wine (at which point the mushrooms should release more liquid). Stir again until evaporated, then add the butter. You don’t really want to cook the mushrooms in the butter; rather, stir until butter is just melted and mushrooms are glazed and remove mushrooms from heat. 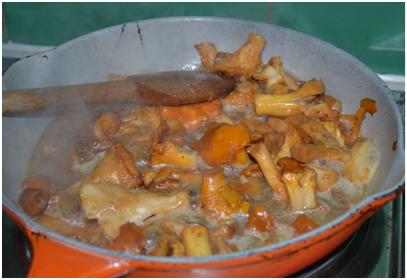 Serve fish whole or with the head and bones removed, with leeks and mushrooms, accompanied (if you like) by boiled new potatoes with olive oil and parsley.