Les parents love les bistros. So, on our last night in Paris, we decided to try the ambitiously named Bistro des Gastronomes. Bistro des Gastronomes opened quietly in the 5th arrondissement in January of this year. It’s a funny place. Consider: (a) a hot young chef (he most recently worked for Christian Constant *swoon* and at Chez Michel) (b) reasonable prices (at €35 for three courses it’s a bit splurgy for me, but not if les parents are buying); (c) a good, fairly central location; and (d) very good food. A recipe for success, non? At the same time, it’s definitely too brightly-lit; the blond wood paneling is rather soulless, and bizarrely they insist on playing kinda crap pop music. So it feels a little bit like having one’s dinner in a dental office waiting room.

But first, the food. Overall impression? Honest, generous, thoughtful, and occasionally quite clever. The meal started with a very nice “amuse” (more like a pre-appetizer) of cream of leek soup, liberally drizzled with a lovely savoury reduction and garnished with crisped greens.

Starters were generally very good. My father had the clear win with his boudin noir starter: this was a playful and inventive dish. The boudin noir was thinly sliced and crisped, and served atop an apple galette. The dish was light, modern, and perfectly balanced.

My mother also did very well with her razor clams in persillade (a traditional sauce made with parsley, shallot, butter, and garlic), served heaped with crisped potatoes. Although I thought the crisps were a little too brown, it was a generous portion and the razor clams were cooked perfectly.

My dish, however, a “cassoulet” of escargot with wild mushrooms, was better in concept than execution. Yes, escargot resembles mushrooms both in texture and earthy flavour, but their delicacy was lost in the red wine-based sauce. Although it was tasty, I found the dish somewhat muddy and lacking texture. The portion, again, was huge.

On to mains. My dad scored again with his dish of ris de veau (veal sweetbreads), a €10 supplement on the menu. They were sweet, tender, and beautifully – albeit conventionally – paired with girolles, cabbage, and foie gras. Our only complaint was that the portion was over-large, with the result that the plate wasn’t very pretty.

My mother’s cuisse de lapin (rabbit leg), served with potatoes dauphinoises and a rich veal jus, was also an extremely nice, classic dish, but I found my duck confit on the dry side, and unimproved by roasted figs and glazed carrots. Both of these felt like an afterthought. A shame.

The desserts were where the restaurant fell down. All felt very home-cooking-y – simple and easy, but unimaginative and occasionally uneven in their execution and presentation. I was underwhelmed by my dad’s pain perdu with caramelized apples. My mother’s “tarte” au citron – served in a coffee cup, with crumbled sablé at the bottom, topped with curd and meringue, was way too sweet – unusual for France – and the sablé did not serve tart pastry’s necessary role of providing texture and depth. My poached figs, recommended by our server, were fairly prosaic (i.e., they were garnished with a cinnamon stick and a star anise) and I did not know what to do with the rather dense clotted cream on the side. The dish felt disjointed. 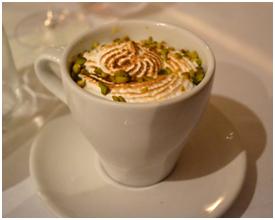 The meal concluded with some rather tasty petit fours, but again I felt like I was having dinner at the home of a well-intentioned but amateur cook. The plate on whole was one-note, and one of our miniature apple cakes was burnt. What chef would let that plate leave his kitchen?

I have a couple of minor quibbles with the service. Our server was utterly sweet and charming. But, we had to ask twice for both water and bread, and our finished starter plates sat on the table for a long time before she came to clear them. Since the restaurant was not that busy, she could/should have been more attentive. Again, these were not significant issues – overall she made us feel both welcomed and cherished, important in a restaurant of this size.

Other reviewers have said that if this restaurant opened in any other city it would be a roaring success. My dad, too, thought it would be impossible to find a bistro of this quality at this price in New York City, where my parents live. But I think that this misses the point. Many exceptional restaurants in Paris have €35 three-course menus, among them, La Régalade, Chez L’Ami Jean, and acclaimed newcomer Neva. (I tried, and failed, to get a reservation at Neva.) In Paris, our chef needs to step up his game, or else his restaurant will remain, simply, a nice neighborhood bistro. Do I recommend it? On balance, yes – the food was very good, the portions were generous, and it’s a nice, unpretentious restaurant. Gastronomy? Perhaps not, but good.

Price per person: €35 for three courses (not including wine)

The verdict: Worth a go