It’s official: London has discovered brunch. Even two years ago, you couldn’t find brunch anywhere except hotels, and said “brunch” consisted only of fry-ups (coyly masquerading as “English breakfast”), granola bowls, and the occasional forlorn Eggs Benedict. All that has changed, and as an American (i.e., brunch addict) I’m ecstatic about it. So when friend C turned up on an early Sunday morning flight from San Francisco, brunch was the Thing To Be Had. And, judging from the buzz, NOPI was the place to have it.

NOPI was way posher than I expected. I could totally be making this up, but I swear there was a portico at the entrance. Or the Ottolenghi flag. (If there isn’t one, there should be.) The interior was hushed and muted with chrome accents everywhere. I actually could have done without so much chrome. The downstairs, where we sat at a communal table, was lined with white subway tile and so loaded with chrome it felt to me a bit like my mother’s bathroom, or an oyster bar.

Our server was friendly, earnest, and attentive, and got the meal off to the right start with a generous pour of absolutely acceptable Prosecco (reasonably priced at £6.50 a glass). The food, however, although overall quite good, was not perfect. We loved the Shakshuka (£11): baked eggs with sweet spiced tomatoes and red pepper and garnished with generous globs of rich crème fraiche. The eggs were cooked just right, the whites tender and the yolks voluptuously gooey. Friend C said she’d eat this dish for breakfast every day.

I liked the concept of burrata with grapefruit, caraway and basil (from the regular menu, £12), but the dish was slightly off balance. The grapefruit sections felt too big, and we also thought microbasil may have been better than the mature leaves that were on the plate. These flavours dominated the sweet creamy cheese and the caraway (otherwise an inspired pairing). Although it was tasty, it was one of those dishes where you find yourself repeatedly trying, but failing, to create the perfect bite.

We were both disappointed by the black rice (£6.50). Maybe it was having a bad day. Maybe it had a hangover. Whatever the cause, it tasted a bit watery and the texture was rather flaccid. It was the only dish we didn’t finish, which seemed to genuinely distress our sweet server. 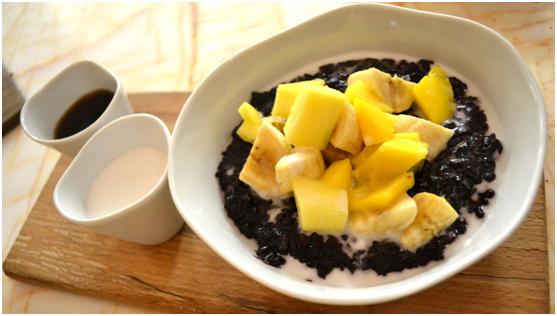 At the end of the meal we each (separately) paid a visit to the bathroom. WHOA. The bathroom is INSANE. It is tiny, octagonal, and COMPLETELY LINED with mirrors and identical chrome-handled doors which create a freakish bad trip/good trip funhouse effect. It’s dizzying. There literally is a sign on the floor pointing to the way out and let me tell you, it is necessary. As I was washing my hands, another woman came in. “My god,” she said. I was feeling smug because I’d found my way to the toilet (much more challenging than it sounds) and had even figured out where the exit was. As I opened the door she looked at me with a panicked expression. “Don’t leave me,” she begged. I left her. (She’s still there, perhaps.) Boys, tell me: is the men’s room at NOPI as exciting/terrifying?

The celeb chef vibe may have been taken to unintended extremes: I was confused but delighted when our bill came weighted down with what remarkably resembled a metal toy used to enhance male sexual pleasure. How apropos for its Soho location, I thought. It’s an O, said friend C. OHHHH.

So yeah, I liked NOPI. I thought it was a good brunch. It was fun. I may have been a little harsh in this review because I expect a restaurant like this to live up to the hype. It didn’t, quite, but it’s worth checking out. If only for the bathroom.

Price per person: £25 including a glass of Prosecco and service (but I could see running up quite a tab at other mealtimes!)

The verdict: Worth a go

2 thoughts on “Brunch at NOPI”