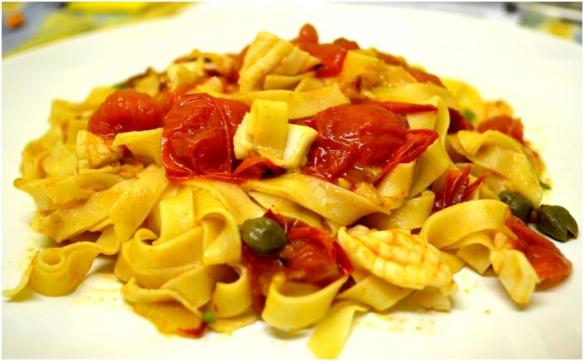 Blogging has turned me into a culinary diurnal vampire. “Huh?” you say. Let me explain: as a food blogger, you realize pretty darned quickly that without natural light your food photos look like … well … crap. This is the case even with a nice SLR camera. It all gets flat and yellow. You know what I’m talking about. It’s when the food looks kind of dessicated and (let’s face it) unappetizing.

I have a single window in my kitchen that faces vaguely north. So, being fairly obsessive-compulsive, I now find myself cooking dinner at 11 a.m. Then I take half a dozen photos of whatever I’ve cooked and I put it away. Or I eat it for lunch. In August I had no idea how grim things could get. Now, by three, the light turns gray, and if I haven’t finished what I set out to make that day I start to fret. It’s a problem. I’m sure that as the winter progresses I’ll be styling photos in the living room at 9 am, shooing cats away and moving plants around. But my personal bloggy rule is this: if it doesn’t taste good don’t write about it. Period. But if it’s delicious, do write about it. Hence this blog post about this lovely calamari and pasta dish, notwithstanding the fact that I actually cooked it at dinner time for dinner and so (horror!) couldn’t get any really nice pictures of it. (You may notice a trend, by the way. I used the leftover coconut milk and lime from my black bean soup to make my Malaysian squid curry. This dish, of course, uses the squid I didn’t put in the curry. It’s all about economizing, since I spent all my money in Seattle on booze and tasty eats.)

I could have been super pretentious about this dish, and titled it “Fettucine ai Calamari, Pomodori e Caperi.” That would have made me sound ultra fancy, and possibly annoying. But since I couldn’t take the photos outdoors on a wooden picnic table, with the sun sparkling through a glass of Orvieto strategically placed behind the dish, I had to dial it down a bit. But this does taste authentically and fabulously Italian. You can almost picture yourself at a charming restaurant in the Trastevere, watching exquisite Italian people animatedly discuss politics. It’s a little spicy (you know my weakness), the ripe, partly cooked cherry tomatoes pop in your mouth, and it’s all got a slightly oceany briny flavour from the capers and squid. There’s also a trick: I’ve made this with butter instead olive oil, which adds a delightful nutty richness (I think butter is especially nice with fresh tomato sauce). I do recommend making this with fresh pasta since it’s so much more delicate than dried, but I’m sure it would be fine with whatever pasta you’ve got in your cupboard. Also, make it with/for someone you love, and eat it with them, or else eat it alone, because it’s got a shitload of garlic.

The proportions are for two people (leftover pasta just never tastes good), so multiply if you’re making it for more (maybe keep the garlic amount where it is, since once you get past three cloves or so you’re doing some serious business).

1/2 pound fresh pasta (if you’re using my fresh pasta recipe, this is a little less than half the recipe)

1 pound cherry tomatoes, sliced in half

150-200 grams (about half a pound) of squid, cut into rings or sliced and scored on the diagonal

1 teaspoon salt (or more to taste)

This sauce cooks relatively quickly, so you may want to start by heating your pasta water. Then you can keep that at a simmer while you make the sauce (thereby avoiding overcooking the squid). If you are using dry pasta, you will want to cook it at this point, unless you’re a fly-off-the-cuff kitchen whizzer (‘expert multi-tasker’) like me. Cook it until it’s al dente (it’s going in the pan later, so you don’t want it too soft), drain it, and rinse it to keep it from getting sticky.

On to the sauce. Melt the butter in a heavy-bottomed frying pan over medium heat. When it is foamy add the garlic and sauté quickly until it is tender, but not brown. Add the red chili flakes and the wine (the butter will sizzle and fizz marvelously), and then stir in the tomatoes.

Cook for several minutes, shaking the pan to toss, until the tomatoes have started to turn slightly golden, and their skins have begun to wrinkle and contract. Add the capers and the salt. The tomatoes should immediately release a lot of liquid. Reduce the heat so this doesn’t all steam away. Crank your hot water up to a boil, drop your fresh pasta in – it shouldn’t need more than a couple of minutes to cook – and while it’s boiling stir the squid in with the tomatoes. Cook until the squid is just tender and then remove the pan from the heat. (If you’re anxious about overcooking your pasta, or don’t feel up to expert multi-tasking, you can cook it now instead, while your squid is sitting in the sauce. Your squid shouldn’t turn rubbery if you err on the side of minimal cooking.)

Again, cook your pasta just to al dente – anything more and it will get soft in the sauce. Then return the saucepan to medium heat, and once it’s hot dump in the pasta, basil, and lemon zest. Toss gently with tongs for about another minute, or, if you want to play TV chef, toss it in the air.

You’re done! Dish it up for yourself and a happy guest. (Incidentally, the photo below was taken with a flash. The headline photo was taken without one. Which plate looks more like something you’d want to eat? Collaborative blogging! Let me know what you think.)

Serves 2 as a main course.

22 thoughts on “Pasta with Calamari, Tomato and Caper Sauce”

Leave a Reply to The Grubworm Cancel reply