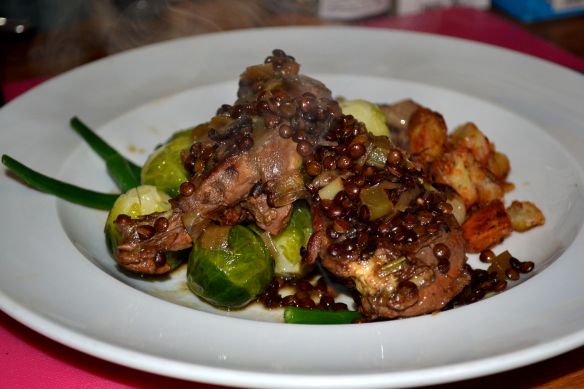 The great revelation for me when I moved to London was the availability of affordable game. In the United States, unless you hunt or know someone who does, it is very difficult to find anything more exotic than duck without paying through the nose for it. (Even duck is prohibitively expensive.) This is particularly true in New York City, where I grew up. Wild game? Forget about it. So it was with great excitement (seriously) that I realized in London, not only could I find game, I could actually afford it and get really good at cooking it.

Last Sunday I went to the Marylebone Farmer’s Market. I was going to buy a rabbit. Maybe a hare! I was going to make paté using my meat grinder, a lovely vintage hand-cranked item that my mother sharpened and schlepped all the way from the United States for me. But I got to the market kinda late, and my favourite purveyor of wild game had sold out of rabbit, hare, and about half the other things on his chalkboard. I was (momentarily) crestfallen.

But the pheasants! They were two for £6! Dare I? I called my lovely friend Will (husband to the wonderful Jess), a brilliant cook and expert on all things meat. “I’m at the Marylebone Farmer’s Market!” I said. “How ‘bout I buy a brace of pheasants and come over and cook them at your flat?”

“Great!” said lovely Will. Two days later I was in Will and Jess’s kitchen, pheasants, leeks, and a sack of Brussels sprouts in hand.

The dish we created is a rich but delicate autumn stew with a dark, gamey flavour. The pheasant, a lean and rather persnickety bird to cook, essentially braises in its own juices, helped along by the addition of some wine and nice aromatics. The lentils cook in the same liquid and their flavour gets awesomely nutty and complex. I should say that it also helps to have fairly young, tender birds. (I can see how cooking with scraggly older birds could be tricky.) I imagine this dish would be GREAT with rabbit. American readers, maybe try squab? Or . . . or . . . super free-range chicken? (It won’t taste the same, but it will be tasty.) 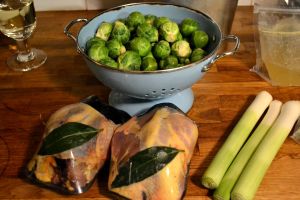 About ¼ cup of olive oil

2-3 teaspoons salt, or to taste

Wash your pheasant well, then quarter it and remove the breast meat from the breastbone, reserving the bones and gizzards. If you are unsure about how to do this, I strongly recommend this video. (It’s for a chicken, but the anatomy is not all that different.)

Glug a little olive oil into a heavy stockpot and brown your bones and gizzards over medium-high heat. You are aiming for a nice dark brown caramelisation, which will add plenty of flavour to your cooking stock. Add the slab bacon and cook for a few minutes, then add the wine. Stir vigorously to deglaze, then chuck in the bay leaves and chicken stock, and simmer until reduced by about half. Pour liquid through a wire mesh strainer and discard the solids.

Heat about 2-3 tablespoons olive oil in a wide deep skillet or casserole dish large enough to fit the pheasant in a single layer, and then brown the pheasant pieces on both sides and remove to a plate to rest.

In the same pan, sauté together the leeks, celery, fennel seeds, mustard powder and thyme leaves over medium heat until the leeks and celery have started to soften. Then add the cinnamon stick, red chili pepper, and lentils and sauté for about another minute or two. 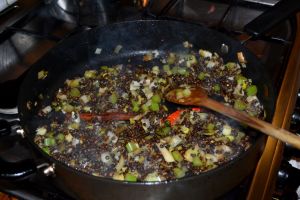 When the lentils are tender and you have the sauce-pheasant-lentil ratio you want, remove pan from heat, cover, and allow to rest for about 10-15 minutes, spooning lentils and jus over the pheasant pieces. Remove and discard cinnamon stick and chili pepper, and serve with steamed Brussels sprouts and roasted potatoes, or with mash, or just eat on its own with plenty of crusty bread to sop up the delicious juices.

18 thoughts on “Braised Pheasant with Lentils”