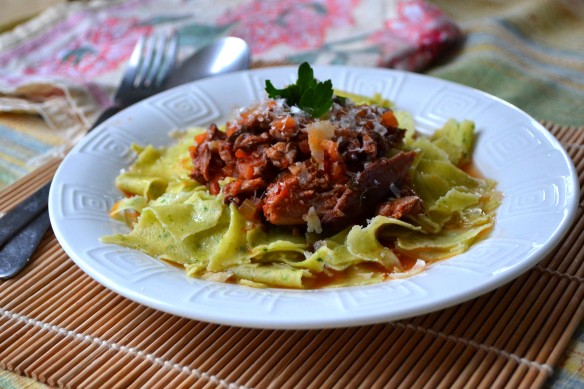 For a long time I didn’t ‘get’ rabbit. “It tastes just like chicken,” people told me. Why not eat chicken, then, I wondered. It was like frog’s legs (which, by the way, taste like chicken only if one imagines one’s chickens cold-blooded and amphibious). I.e., it seemed to me like bourgeois foodie one-upmanship. And there’s the cute factor. When I tweeted about making this ragu, someone replied mournfully that their father had killed their pet rabbit and they never got over it. I too had a pet bunny as a child, and I have cats, and the little rabbit carcasses uncomfortably remind me of my kitties. But if you are a carnivore, wild rabbit is about the most sustainable meat you can eat. Rabbits breed, well, like bunnies (apparently a wild rabbit will have five to six litters a season), unlike most animals we eat they spend their whole lives outdoors, they are killed humanely, and the meat consists entirely of lean white-meat protein. Rabbit beats all or almost all other lean meats for protein to fat ratio. In the UK, you can buy a whole two to three kilo wild rabbit for about £4, which, considering that nearly all of that is usable meat, is extraordinarily good value for those of us trying to cook well on a budget. And rabbit doesn’t really taste like chicken, any more than monkfish tastes like lobster.

When I’m cooking lean gamey muscular meat, I like to do three things to it, usually in this order: marinate it; braise it; and stew it. It’s a lengthy process, but once you’ve determinedly battered at the collagens with low, slow cooking, the meat relaxes, absorbs all the delicious braising juices, and attains mythic proportions of deliciousness. The first time I cooked a rabbit ragu I was astonished by how flavourful it was. The meat stood up to the rich sauce, maintaining its density and distinct, subtle flavour. The first time I cooked a rabbit ragu was also the first time I jointed a rabbit. Nobody had ever showed me how, and it’s possible that actual butchers and chefs would throw up their hands in disgust at my efforts, but it wasn’t too difficult.

When you are buying a rabbit (if you’re motivated by environmental concerns, do cook wild rabbit – farmed rabbits have almost the same impact on the environment as farmed chickens), look for a rabbit with firm, dark-pink flesh and a sweet smell. Rabbits shouldn’t smell particularly gamey. You probably will start out with something that looks like this (tender-hearted vegetarians, don’t read further; this blog post has bunny carcass photos): 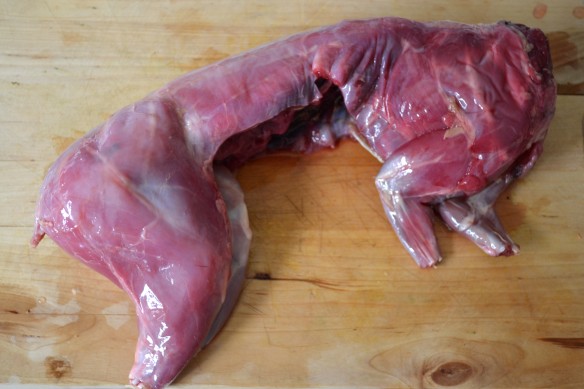 You can see quite clearly where the joint of the large hind legs attaches to the saddle. With a sharp knife gently carve around the joint, turn the carcass on its back, and separate the legs from the saddle. Similarly detach the front legs from the upper rib cage. If you’re lucky you may have some gizzards; don’t throw these away. Pull them off and reserve for another use or add them to your ragu. Separate the saddle from the ribs. I save the ribs for the braise too; bones add flavour, and even this meat is usable and delicious. When you’re done jointing your bunny you should have something like this: 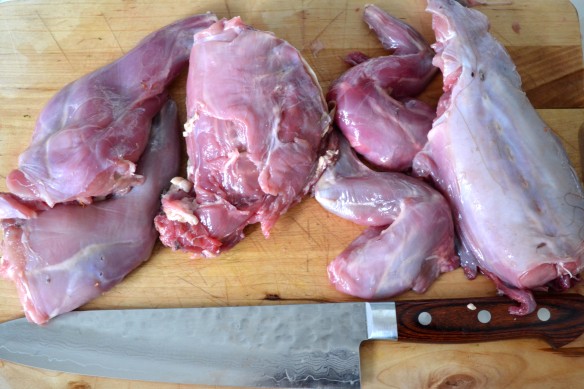 One whole rabbit (about two to three kilos), jointed

A large handful of fresh thyme

One to two stalks of celery, cut into small dice

Layer the chopped onion, garlic, and carrot in a large pot or casserole with the rabbit pieces. Cover with the wine, and marinate for at least four hours and up to overnight.

Remove the rabbit pieces from the marinade and season them on both sides with salt and pepper. The wine will have stained them a lovely purple. Drain the chopped vegetables, reserving the marinade juices.

Heat the olive oil over medium-high heat in a skillet or, if you wish, in your braising casserole. Brown the rabbit pieces on both sides and remove from pan. In the same pan, sauté the vegetables from the marinade until they are soft, about five minutes. Transfer the rabbit pieces and vegetables to your casserole, add the thyme sprigs and bay leaves, and cover completely with the marinade liquid. If you don’t have enough liquid, it is fine to add a little water. 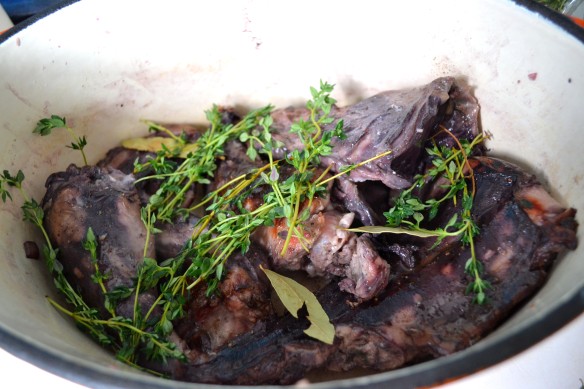 Cover the pot and braise in your oven for about two and a half to three hours, or until the rabbit is completely tender when you poke it with a fork or sharp knife.

When they are cool enough to handle, pull the rabbit pieces from the pot, and again strain out the liquid, Discard the braising vegetables and herbs but reserve the liquid.

Using your fingers, pull the rabbit meat from the bones, shredding into bite-sized chunks. You should have a tidy pile of meat for your ragu.

In a large heavy-bottomed saucepan, heat the remaining olive oil, and sauté together the garlic, celery, and crushed red pepper (if using) until the garlic and celery are soft and transparent but not brown (about two to three minutes). Add the carrots and continue to sauté until the carrots have started to soften (about three minutes). Stir in the tomatoes. When the tomatoes have started to bubble, reduce heat to a simmer, add the rabbit meat, sugar and enough of the braising liquid to completely cover the meat. Siphon out some of the liquid (about 1/4 cup) and combine together in a bowl with the tomato paste (so the tomato paste doesn’t get lumpy) then stir back into your ragu. Simmer for about an hour, adding additional braising liquid as needed.

Taste and adjust seasonings, then add the thyme, sage (if using), and flat-leaf parsley. Cook for another 15 minutes.

Serve topped with grated parmesan or pecorino romano over pasta (I served mine with wild garlic pasta), polenta, or on its own with crusty bread. 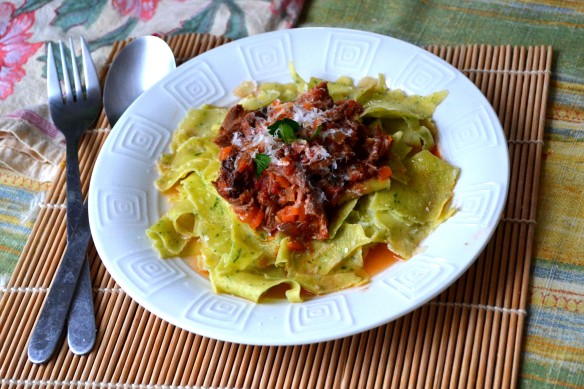