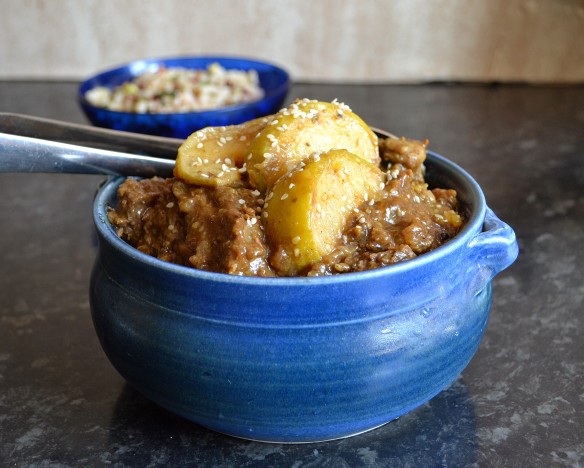 I love summer food; love the shift from stovetop to grill and outdoor eating, the fresh vegetables, and the salads, berries, and summer fruit. But with the advent of warm weather, I have to set aside BRAISING, which is my favorite way to prepare meat. Braising, in which (usually) meat is (usually) first browned and then cooked slow and low in liquid, is the best way to cook cheap cuts of meat (unless you plan to barbecue them – more about barbecue and a fabulous weekend competing with friends at the British Barbecue Society’s Grassroots Shake and Sauce – and winning the prize for Best Newcomers! – in another post). But in hot weather, the thought of turning your kitchen into a sauna courtesy of a six-hour braise is only slightly less appealing than the thought of eating the stew that results. Moroccans, however, have mastered the hot-weather braise. I’m speaking, of course, of the tagine.

Although the word “tagine” refers to the conical earthenware pot in which the dish is cooked, a tagine is also used as shorthand for the dish itself.  Moroccan tagines frequently involve the pairing of meat with fruit and, gloriously, with sweet aromatic spices like cinnamon, saffron, ginger, and coriander. The fruit acids help tenderize the meat, and also add a welcome brightness to the finished dish. This dish is adapted from my favorite Moroccan cookbook, and it is gorgeous. The beef is slowly cooked in stock with raisins (I used beautiful Persian sultanas, or golden raisins), and fragrant spices. It’s served topped with tart, crisp apples which have been lightly caramelized in butter and honey, and toasted sesame. The tart apples provide an almost-Persian sourness that offsets the sweetness of the stewed meat. Cook this dish soon, before summer is fully upon us. 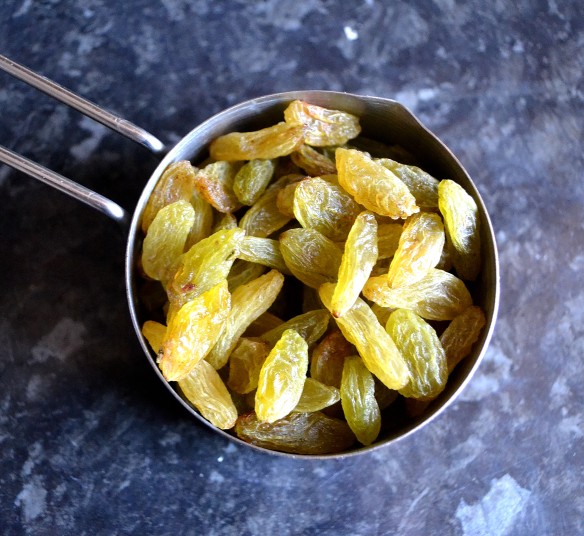 1 medium onion, cut in half and sliced

2-3 crisp apples, such as Granny Smith, halved, cored, and cut into eighths

Start by seasoning your meat liberally with salt and pepper. Melt half the butter together with the olive oil over high heat in a large, heavy-bottomed saucepan or casserole dish. Brown the beef in batches on at least two sides, then remove from pot. 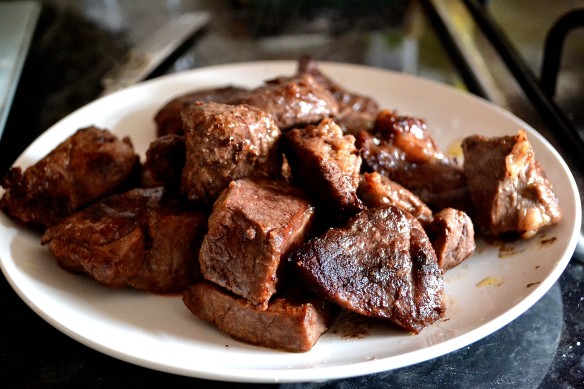 Reduce the heat to medium, then sauté the sliced onion until soft. Add one teaspoon of the cinnamon, the dry coriander, and the ras-el-hanout, and continue to sauté for another three to five minutes, or until the spices have begun to color. Return the beef to the pot, and add just enough stock to cover the meat and the saffron. Reduce the heat to low, cover, and simmer for an hour and a half, stirring occasionally. If the liquid level gets too low, you can add a little water or additional stock (not too much – you want the sauce to be pretty thick).

After an hour and a half, stir in the sultanas, one tablespoon of the honey, and the chopped fresh coriander, and continue to cook for another half hour to an hour, or until the meat is tender. Taste and adjust seasonings, and continue to simmer, this time uncovered, until the sauce has thickened and reduced.

Approximately 15 minutes before you’re ready to serve, melt the remaining butter and honey together in a frying pan over medium-high heat. Add the sliced apples and cook, turning frequently, until slightly golden and just tender. Sprinkle the apples with the remaining ½ teaspoon cinnamon. Serve the tagine topped with the apples and toasted sesame seeds, with couscous or bread.

Adapted from The Food of Morocco, by Tess Mallos

17 thoughts on “Beef Tagine with Apples, Sesame, and Raisins”