The concept at Kitchen Table is straightforward: 19 diners sit at a U-shaped bar encircling an immaculate kitchen and watch their 12-course tasting menu being prepared and plated by chef James Knappett and a small team of sous-chefs. I suppose it’s logical that the television-viewing public’s seemingly-unquenchable enthusiasm for behind-the-scenes perspectives on fine dining would eventually lead to actual tableaux vivants. Well, if food is theatre, then Kitchen Table is French art-house cinema: edgy, stylish, and very, very sexy.

The “menu” is a terse list of primary ingredients on a chalkboard, one word for each course. “Oyster” was a raw oyster, dressed in a pungent oyster mayonnaise, rolled in a transparent oblong of raw Granny Smith apple, topped with a shiso leaf and served with a subtly-flavored shiso granita that had the texture of dry snow. This was followed by “chicken” – Kitchen Table’s near-legendary crisp of chicken skin, topped with a smear of rosemary mascarpone and bacon jam – which friend M said was the best thing he’d ever eaten. For “scallop”, Knappett pried open fresh Scottish scallops, bathed them briefly in soy sauce, which ‘cooked’ the scallops, and served them with a slice of raw fennel. For me, this dish was the only slightly off-note: I thought the oily soy overpowered the fresh sweet scallops. (Friend M disagrees.)

I have to confess that at about this point in the evening, aided by the Negroni I’d had before dinner, the glass of champagne I drank on arrival, and the bottle of white wine we shared immediately afterward, I started to get very tipsy. My phone tells me there was crab, which unfortunately I don’t remember at all, but which M says sat in a mushroom cap, was drizzled with some kind of infused oil, and was divine. There was an elegant mullet dish – the fish was fried twice, skin side down, for extra texture – a stunning, al dente pasta with wild garlic, topped with shavings of the season’s first summer truffles (a £10 supplement; delicious, but didn’t add much to what was already a gorgeous dish), and asparagus – exquisitely crisp-tender, shaved thin, in a delicately foamy hollandaise-type sauce.

Watching the kitchen took on a hypnotic quality. As the dishes’ complexity increased, Knappett and his sous-chefs moved gracefully but efficiently, murmuring to one another, plating the dishes together at a central island which they meticulously wiped down to gleaming cleanliness between courses. If anything, I gained an appreciation of the many processes and deliberation that went into the dishes we were eating. We watched as a tray of spring leeks was rubbed with butter, grilled over hot coals until black, peeled, tenderly massaged with still more butter, slowly roasted, and massaged again. These were sliced in half lengthwise and served alongside tender, medium-rare baby lamb rump, accompanied by cumin yogurt, sumac, and (my camera phone tells me) some kind of herb-infused oil. A cheese course – served with crumbly biscuit, sliced grapes, and lightly-pickled celery – was followed by a refreshing mango granita served with yogurt swirled with mango curd.

Lately, I encounter beet in desserts and cocktails whenever I go to über-trendy restaurants. Still, even if “beet” was de rigueur once we got to desserts, I loved (what I can remember about) this dish. Barely sweet earthy beet cake, a beet sorbet, ginger and (I don’t remember what) ice cream, a bright creamy (yogurt?) gelato, and thin shards of deeply-beety, bright-red crispy meringue. And then the final course, a petit four of sorts, chocolate, cake, and matcha green tea marshmallow cream (I think), like a glorified mallomar.

Mention “Kitchen Table” and words like “pedigree” and “Michelin stars” start getting bandied about. Certainly, Knappett’s “pedigree,” which includes Per Se, Roganic, and the Ledbury, creates high expectations. In this case, those were justified: I thought our meal was pretty near flawless. I’ve never eaten at Bubbledogs, the cash cow that funds James Knappett and Sandia Chang’s labor of love, but I am devoutly grateful to all the happy, noisy people who turn up daily to consume copious quantities of grower champagne and hot dogs for making my meal possible. 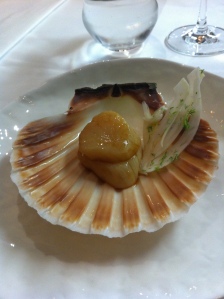 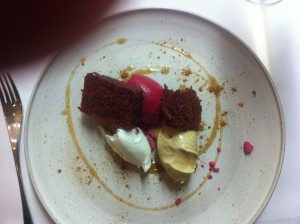 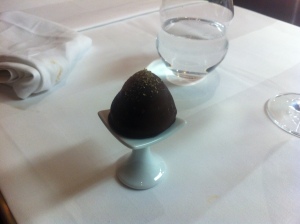 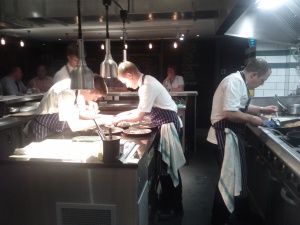 Price per person: £68 for a twelve-course tasting menu, not including drinks and service

The verdict: Must Try!

6 thoughts on “Kitchen Table at Bubbledogs”