It’s been a little while since I’ve done any home cooking posts, for which I apologise. This is because I’ve been whooping it up and dining out in a manner quite unbefitting my modest means. (A good friend flew all the way to London from Oakland, CA to visit; what else could I do?) But, winter comes equally for the grasshopper as for the ant. And so it was I found myself staring into a nearly empty fridge wondering what the hell I could make for dinner.

To give credit where it’s due, the idea for this dish came from a culinary master class I watched on Australian MasterChef a couple of months ago. It is, simply, delicious — tangy, spicy, and fun to eat — and the ingredients are cheap as chips. All you need is a willingness to embrace deep-fat frying as the way forward. And sumac.

4-5 cloves garlic, peeled and lightly smashed with the back of a knife

For the Brussels sprouts:

500 grams (about a pound) of Brussels sprouts, washed, trimmed, and sliced in half, with the coarse outer leaves discarded

1 green and 1 red chile pepper (I used a Thai chile and an attractive red chile of mysterious origin, since it’s what I had on hand)

Heat one tablespoon of olive oil, the cumin, and the mustard seeds in a heavy-bottomed saucepan over medium heat until the cumin seeds start to brown and release an aroma and the mustard starts popping. Stir in the garlic and, after half a minute or so, the lentils. Cook the lentils briefly with the spices and then add the water. Simmer, uncovered, over medium-low heat, stirring occasionally. 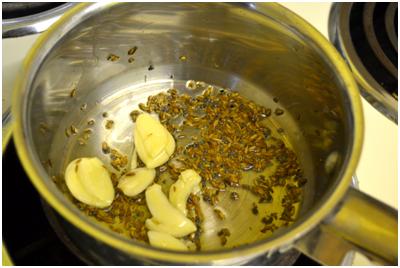 It is very important to this dish that you not overcook the lentils, so after about 30 minutes you should start testing them. You want your lentils cooked through but firm, almost al dente. They should not take longer than 45 minutes or so to cook. (Sometimes they do, however. Trust your instincts.) When they taste done to you, you should also stir in the salt and the red wine vinegar. (You don’t want to do it too early as salt makes the lentil skins tough.) Drain off any excess water and transfer immediately to a bowl to cool.

Par-cook the Brussels sprouts in boiling salted water for no longer than two minutes, until bright green and crisp-tender, then drain immediately. 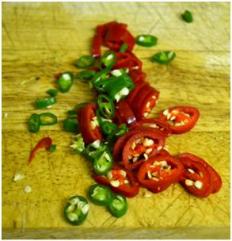 Heat the remaining ¾ cup olive oil in a pan large enough to hold your Brussels sprouts in a single layer to at least 180 degrees Celsius (360 degrees Fahrenheit). Fry the Brussels sprouts, stirring occasionally, until starting to brown and skins are crisp. Stir in your chile peppers and continue to cook for an additional one to two minutes. (I fried my chile peppers first, but if I had it to do again, I’d do it this way so the peppers keep their colour.)

Remove from pan with a slotted spoon and, if you wish, drain on paper towels for a couple of minutes. Toss in a bowl with lentils, lemon juice, sumac, and coarse salt to taste. Sprinkle with additional sumac and serve immediately.

Serves 4-6 as a side dish or light main.

4 thoughts on “Fried Brussels Sprouts with Spiced Lentils and Sumac”