Almost exactly a year ago, I ate at El Suadero, the Monday night Mexican pop-up at Sitka and Spruce in Seattle, which is where I had the unforgettable eponymous milk-braised veal brisket that inspired this dish. Sometime after I returned to London, I set about finding boneless rolled veal brisket, which is what I decided that I needed to recreate it. Starting from the premise that I would only buy free-raised veal, I bought two rolled veal briskets from the lovely people at the Wild Beef Company, which sometimes trades at the Borough Market, and excitedly told my father what I planned to make. My father, who is not a religious man but can have a cruel streak, intoned ominously, “Thou shalt not seethe the calf in its mother’s milk.”

I was struck, horribly, with feelings of intense guilt. How could I, a former vegetarian, have strayed so far as to now eat veal? Even free-raised veal? How barbaric of me to cook a calf, a tender innocent baby, in milk! I sadly put the veal brisket (which fortunately was vacuum-packed) in the freezer, where it sat for a few months. Even reminding myself that my father, who was raised kosher, now happily eats beef in cream sauces did not make me feel better. At the same time, I researched this dish. If I were going to seethe the calf, as it were, I wanted to do it justice. I learned that milk-braising is common in some parts of Mexico, and is not limited to veal, or to brisket. Pork shoulder is similarly “seethed,” as is goat. (There is also a classic Northern Italian milk-braised meat preparation.)

This dish is honestly one of the best things I have ever cooked. Friends who ate it at my birthday party said they had not had better food from me, and my flatmate, in one evening of reckless abandon, consumed all of the leftovers. The brisket is rubbed in a thick smoky marinade of chipotle, ancho, and piquin peppers, roasted garlic, coffee, toasted cumin, cinnamon, fennel, and herbs, in which it sits overnight. Then it braises slowly in a mixture of milk and bone marrow stock. At the end of the braising, the meat literally is so tender it falls apart at the touch of a fork. The lactic acid in the milk tenderizes the meat, and the natural fats combine to make a wonderfully rich, intensely flavorful sauce. Although during the braising process, the milk curdles and eventually separates into solids, these are puréed with the sauce, which is then reduced, and poured over the meat. Heaven.

Traditionally, this dish should be served with a red onion salsa and tortillas. (I did make a red onion salsa, and you can too, by combining chopped red onions, tomatoes, chilli pepper, garlic, lime juice, and coriander (cilantro) leaves.) But you can also serve it with rice, or cornbread, or just bread, so long as you have something to sop up the marvellous sauce. Although I made this dish with veal in a faithful effort to recreate the original, you can use beef brisket, short rib, or stewing meat, or pork shoulder, or any other cut of meat you think would benefit from long, slow, cooking. Using a different cut of meat may affect the braising time, but otherwise, this dish is universal. Seriously: one of the best things I have ever cooked.

A food processor or mortar and pestle

A dribble of olive oil

1.5-2 kilos (3-5 pounds) rolled boneless veal brisket, or any other meat suitable for braising

An additional teaspoon of salt, plus more to taste

Preheat your oven to 190 degrees Celsius or 375 degrees Fahrenheit. Slice the top ½ inch off the garlic bulb, drizzle with a little oil, wrap in aluminium foil, and put in the oven to roast until tender (about 15-20 minutes). While the garlic is roasting, soak the dried chillies in the boiling water, and toast the cumin and fennel seeds in a dry pan, shaking frequently, until lightly browned.

When the garlic is soft and cool enough to handle, squeeze the cloves out of the bulb. They should pop out easily. If you have a mini food processor, purée all of the marinade ingredients, including the soaking water from the chillies, in that, or use a mortar and pestle to pound into a thick paste.

Wash and dry your meat, then rub the marinade over it well, put in a ziplock plastic bag or container, and put in your fridge to marinate overnight. (Don’t be worried about the spiciness of the paste; it will mellow out as it is cooked.)

Heat the vegetable oil in your casserole pot and lightly brown the meat on all sides. Pour in a little stock, scrape up any of the spice paste that has adhered to the pan, and then return the meat to the pot, and add the remaining stock, milk, bay leaves, two tablespoons of honey, and star anise, if using, and any leftover spice paste. 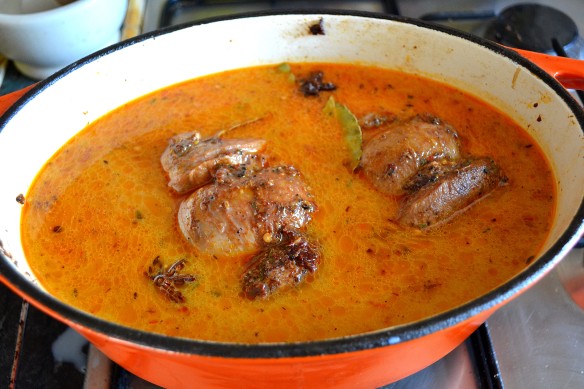 Cover, put in the oven, and braise, turning the meat once about two hours into the cooking. At this point you can also add additional honey and another teaspoon or two of salt, according to taste, but be conservative, as the sauce will later be reduced.

After about four hours of cooking, or when the meat is completely tender (you want to braise this until the meat is more than fork-tender, but completely yielding, like a very soft overripe peach) remove from the oven and take the brisket out of the sauce. You may be dismayed, as the sauce will have separated into a mess of fat and milk solids. Don’t be. This is part of the master plan. Remove the bay leaves and star anise, if using, and purée the sauce until completely smooth using a immersion blender or food processor. Return the sauce to the pot and heat on your stovetop until the sauce is reduced by half and is the consistency of a gravy. (Like gravy, it will thicken as it cools.)  Taste and add additional salt to taste, if needed.

Pull apart the meat with a fork, cover with the sauce, and serve. 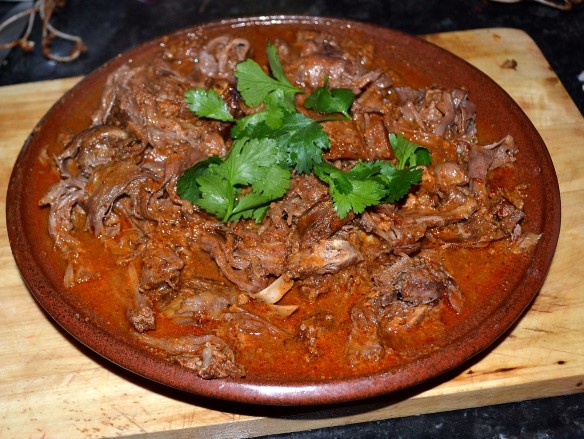 Depending on the weight of your meat, makes 6-10 servings.