It feels like it is always winter in Warsaw. The city is flat, like a prairie or steppe. Once a beautiful city, Warsaw was virtually razed to the ground by the Nazis in 1944 in brutal reprisal for the Polish resistance. It was rebuilt by the Communists into squat utilitarian concrete blocks. Only the old town, also destroyed by the Nazis, has been reconstructed in a painstakingly exact facsimile of the beautiful gothic historic center that used to exist. Warsaw’s streets are broad and straight, and an icy Siberian wind sweeps from east to west.

I was in Warsaw most recently in December, with my mother. It was brutally cold; a dull leaden sky hung low over the city, through which one could occasionally catch glimpses of the sun, a distant icy disc. It snowed every day. The snow blew down the tram lines and squeaked underfoot. Softened by years in temperate Seattle and gentle, gray London, I was so cold. Moisture from my breath condensed and froze on the scarf I had wrapped around my face. I breathed in shallow little gasps. I was too cold to think, too cold to talk. It was in Warsaw that I discovered I have Raynaud’s disease, in which decreased blood flow to the extremities causes them to turn white and numb. My mother and I would set out to walk the city. I would last twenty, maybe thirty minutes before my toes would lose sensation, and then start to ache. There was a narrow window of time, at this point, before the pain would become unbearable and I would have to stop somewhere warm.

On Saturday my mother and I took the tram to the corner of Jerozolimskie and Marszalkowska and then walked to Nowy Świat on our way to the Old Town. It was early afternoon, past lunchtime; we had maybe an hour more of daylight. My mother had a destination in mind, U Kucharzy, in what used to be the hotel Europejski, one of the few buildings that survived the Nazis. A wonderful example of Art Deco opulence, the Hotel Europejski stolidly faced its arch-rival across the street, the elegant Art Nouveau Hotel Bristol. The Gessler group has taken over and renovated what used to be the vast kitchens below the hotel. They’ve kept the massive oil stoves, the tiled walls, and the checkered floors. On a far wall in a small dining room is an enlarged black-and-white photograph of the hotel in its heyday, thronged with people in elegant formal dress. From a distance, they almost look real.

I am just old enough to remember the bread lines before Solidarność, people shivering in heavy coats as they queued for food rations. My grandparents were more fortunate than most; with a daughter living in the West, they could go to the “dollar stores,” shops where for hard currency one could buy foodstuffs not available in the government-run food stores. Polish cookery, like the rest of Poland, suffered through much of the latter half of the twentieth century. Since embracing capitalism, Poland has undergone an ecstatic culinary renaissance. Dishes not served in restaurants for fifty years are being rediscovered and faithfully recreated.

U Kucharzy is a loving and unironic homage to Poland’s magnificent culinary heritage. The waiters are men and exceedingly polite. Dishes are prepared and served with a flourish tableside also by men, nervous and white-coated, wearing tall chef’s hats. We ate nóżki wieprzowe, pork knuckle that quivered splendidly in aspic, steak tartare, sliced from a filet in front of us, chopped, and mixed with mustard and pickle, and móżdżek cielęcy po polsku, veal brains on toast. These were seasoned with onions and parsley, and scrambled in a pan with obscene amounts of butter and an egg yolk. They had the texture of soft scrambled eggs and were almost too rich to eat. Perhaps my favorite dish was the barszcz z uszkami, literally translated as borscht with “little ears.” It was a clear, hot, juniper-scented beetroot broth in which floated small dumplings, joined at the center, and stuffed with cepes. 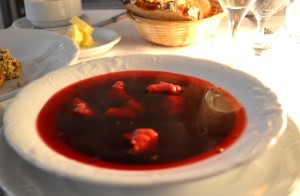 The meal, with two glasses of wine and tea, cost 172 złoty, or slightly less than sixty dollars.

We staggered out into the icy street. It was a few weeks before Christmas and Nowy Świat was beautifully illuminated in the dusk. We were only ten minutes from the old city, a short enough distance for me to walk before my poor feet demanded warmth. The cobblestones in the great sloping square gleamed with ice, and the graceful narrow buildings shone green and gold against the dark sky.

On our last night, on the recommendation of my mother’s friend Grazyna, we went to Stary Dom, in Mokotow, an area that was very elegant before the war and in which some pre-war buildings still survive. Stary Dom exuberantly celebrates Polish cookery. Unlike U Kucharzy, it feels casual, like a country restaurant. On the walls are wonderful old photographs of Poland at the turn of the century. The service is warm and personable.

Stary Dom is Warsaw’s self-confident riposte to the French bistro. At the start of our meal we were brought soft brown bread, flecked with oats, with pickles and a tub of seasoned, spreadable, pork fat. We ate zurek, a classic Polish sour rye soup, exquisitely tangy, with chunks of kielbasa and cepes, and ozorki w sosie chrzanowym, delicate veal tongue in a dill sour cream sauce, and toasted each other’s health with icy shots of vodka which, incredibly, was cheaper than my beer. For our main dish, we shared piesceń z dzika w sosia z jałowka, a speciality of the restaurant. This was wild boar, which my mother tells me is first marinated in vinegar and spices to tenderize it, accompanied by a cepe-rich red-wine reduction with notes of juniper, sweet stewed beetroot, and delicate potato dumplings. Dessert was an old-fashioned, uniquely Polish “cake,” another speciality, which consists of layers of meringue, sandwiched around soft, fluffy pistachio-meringue cream.

Stary Dom is a wonderful restaurant, at once assured and comfortable. Stepping out into the bitter icy night, I felt utterly charmed, lucky, and eager to return. 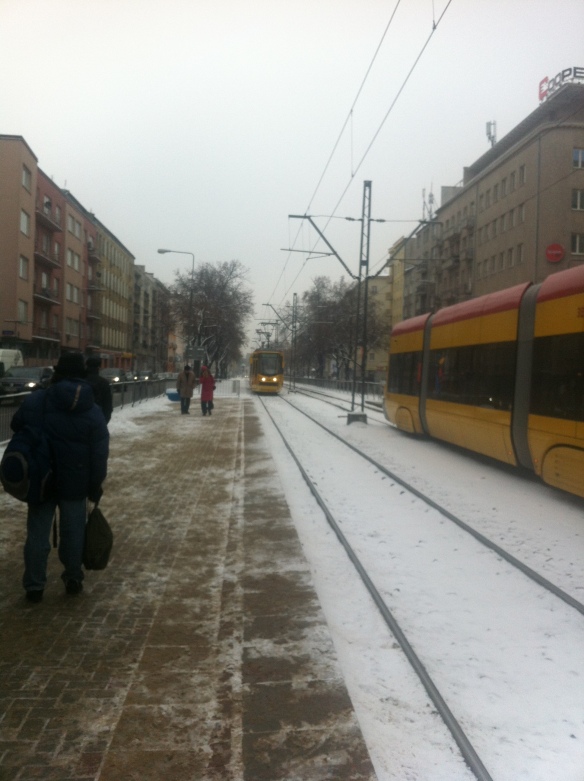 Cold, instagrammed, looking towards the river 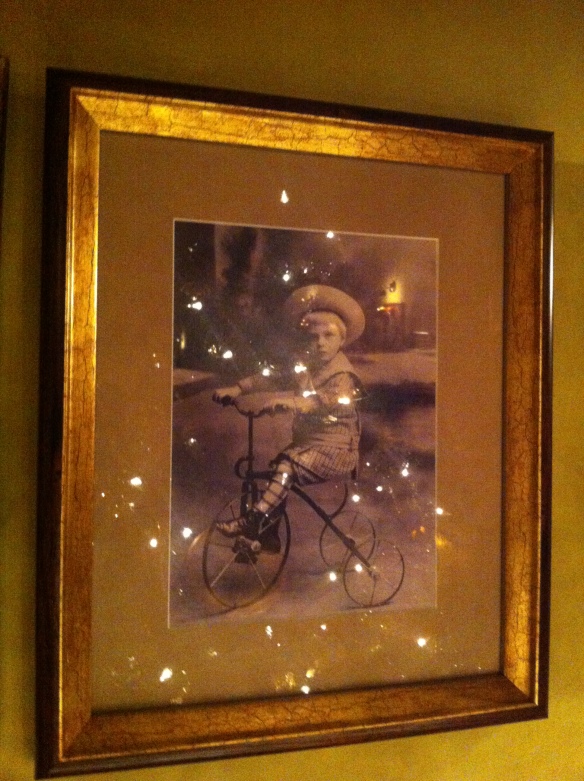 On the wall at Stary Dom

An excerpt from the menu, translated, at Stary Dom

16 thoughts on “Eating in Warsaw – U Kucharzy and Stary Dom”